When religion leads its followers to binary thinking

One of the dangers of religion is that when not used carefully and thoughtfully, it can lead people into binary thinking. 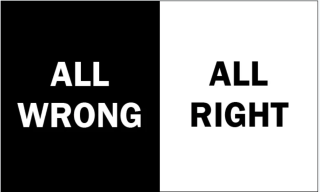 Which means we're faced with either good or evil. In religious terms, nothing is more good than God and nothing more evil than Satan. One lives in heaven and one in hell. 1 and 2. Black and white. Up and down. No third, fifth or 500th choice.

Reality, of course, is much more complicated than this-or-that thinking. And so are human beings. One of the reasons we Americans today are so politically divided (and divided in many other ways, too) is that many of us tend to engage in binary thinking that oversimplifies reality, thus misleading us -- sometimes on purpose.

I've been thinking about this problem a lot, but recently found some help by reading a book called The Happy Burden of History: From Sovereign Impunity to Responsible Selfhood. One of the four co-authors is someone I know, Andrew S. Bergerson, who teaches history at the University of Missouri-Kansas City and whose area of expertise includes the Holocaust.

In writing about modern German history, the authors say this: "One source of confusion here is that we take human beings at their word when they claim to have a coherent self under their command. Historians, for instance, tend to label people as victims, bystanders or perpetrators; or try to determine, once and for all, if a given German was a real Nazi or just a collaborator.

"They treat the self as if it could be expressed as a simple identity like a = b. We presume a coherent self for at least two reasons. There is a sense of nostalgia for a non-fragmentary self, as if we had once been whole and that antediluvian self has not lost its coherence. There is also a contradiction between the whole self we think we want and the plural self that is the only kind we can have. Either way, the myths of a coherent, cohesive individual dangerously oversimplify the way we think about selfhood in everyday life.

"Human beings are compilations of multiple identities. We are necessarily composed of fragments by virtue of the fact that we act in a variety different ways in a variety of different situations, and these manifold deeds engender identities as divergent as philosopher and thief."

Which raises questions about how we judge and label people. Is someone who broke into a locked-up store to grab a rope to throw to a drowning person guilty of theft? Religion that leads to binary thinking doesn't help us answer that question. But religion that says human life is always more valuable than property gives us a good framework to use to come up with a useful answer.

So that leaves us with the task of evaluating what our religious tradition, if any, teaches us. If it teaches simplistic, binary thinking it will lead us astray eventually. If it teaches us core values that can help us make difficult judgments in a complicated non-binary world, then it's a healthy and helpful religion.

Our hunger for simplistic answers is understandable but ultimately such answers will hide more than they reveal and will leave us with a view of the world that is badly out of focus, inevitably causing us to make bad decisions.

(P.S.: Bergerson is scheduled to be one of the speakers in a series of talks that will accompany the "Auschwitz: Not Long Ago, Not Far Away" exhibit that opens June 14 at Union Station in Kansas City. My next Flatland column, scheduled to post May 30, will have some thoughts about that exhibit.)

WHEN RELIGIOUS RULES ARE DEFIED

How does change happen in institutional religion? Sometimes via people willing to challenge current rules. For instance, the Vatican says that Catholic priests are not allowed to preside at same-sex weddings. But as this RNS story reports, "Germany’s powerful Catholic progressives are openly defying a recent Holy See pronouncement that priests cannot bless same-sex unions by offering such blessings at services in about 100 different churches all over the country this week." Something similar happened in the 1960s when the Vatican declared that artificial birth control methods were forbidden. Especially in America, women defied that ruling in droves. The Vatican never changed its mind, but the practice changed in the U.S. Maybe that's what will happen in Germany now. And from there it may spread until the Vatican is following on this issue, not leading. It's not quite what's known as "civil disobedience," but it's close. Another example of a faith community defying the rules: The recent ordination of three women at a Southern Baptist church despite denominational rules against ordaining women to ministry. 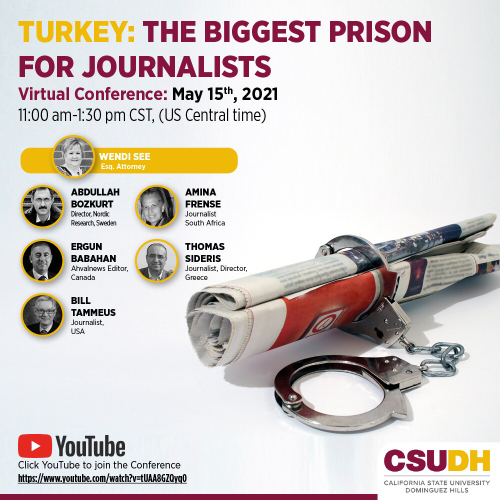 P.S.: I am participating in a global conference on press freedom, focused on Turkey, that will stream on YouTube starting at 11 a.m. CDT this Saturday. The graphic here will give you the link to view the event.