Home Archives Profile
Can the Abrahamic faiths lead to Middle East peace?
Preaching must be political -- just not partisan

Is religion slowly disappearing in the U.S.?

The American religious landscape, once a landslide for Christianity, especially Protestant versions of it, continues to change, and only God knows what it will look like in 50 or 100 years. 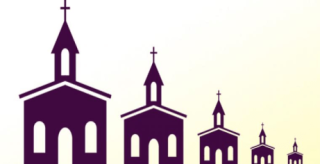 What we do know is that the number of Americans who now claims a membership in a Christian church has slipped below 50 percent, as recent Gallup data shows.

At the same time, we know that the number of people who identify as religiously unaffiliated -- the so-called "nones" -- continues to grow, and there's a new book out that looks at all that, The Nones: Where They Came From, Who They Are and Where They're Going, by Ryan Burge.

Burge says that "churches are a leaky vessel by nature. They lose people through death, and an aging population is so acute for several traditions in the U.S. — mostly mainline Protestantism, but evangelicals are also aging rapidly now. And defections are up. You’ve got to add people into the cup to see the water at the same level."

And not enough of that is happening to keep churches growing or even stable in many cases.

The story about church membership reports that "Forty-seven percent of Americans now say they belong to a house of worship, down from 70% in the mid-1990s and 50% in 2019. The decline is part of a continued drop in membership over the past 20 years, according to Gallup data."

It was pretty obvious 20-plus years ago that this was beginning to happen, and I asked my Kansas City Star editors for permission to travel around the country to document both that and the spread of other religious traditions. But it didn't happen, so I can't pull out old clips today and claim to have told you so.

What faith communities from various traditions face today -- especially after a year of Covid -- is whether they can offer anything to stem the tide of decline. The old answer from 50 or 75 years ago was just to keep the doors open, keep preaching the same message in the old style and expect people to show up.

It's now clear that doesn't work. So should churches, synagogues, mosques and other houses of worship throw in the towel and become social clubs, charities that focus on some of society's needs or tennis clubs? Uh, no.

Instead, of course, they must reinvent themselves to be true to their traditions even while finding new ways to share their core convictions and the actions that flow from those convictions with others.

Which is much more difficult than many people imagine because within settled religious traditions there is a tendency to resist change, especially among those people who imagine that any change compromises their faith. So they can remain on their sinking boat or find ways to sail on in new ways.

I have no plans to be around in 50 or 100  years, so one of you may have to bring me news then of what the American landscape looks like by then -- wherever I am. I'll keep the light on for you. And, if some of you get your wish for me, maybe the heat, too.

(By the way, Religion News Service has done this interesting analysis of what the Gallup figures really mean.)

AN 'ALERGIC REACTION' TO CHRISTIAN NATIONALISM?

To add to the subject started above here today, here is a piece in The Guardian suggesting that an "allergic reaction" to the so-called Christian right and to Christian nationalism has turned many people off, and that accounts for at least some of the decline in church membership. The article quotes David Campbell, professor and chair of the University of Notre Dame’s political science department, as saying this: “Many Americans – especially young people – see religion as bound up with political conservatism, and the Republican party specifically. Since that is not their party or their politics, they do not want to identify as being religious. Young people are especially allergic to the perception that many – but by no means all – American religions are hostile to LGBTQ rights.” Whenever religion oppresses people or treats them in other degrading ways, it should be rejected.

P.S.: I spoke via Zoom yesterday to a church-based book club about my new book, Love, Loss and Endurance: A 9/11 Story of Resilience and Hope in an Age of Anxiety, and it occurs to me that you may be part of such a book club either through a congregation or just with friends. I'd be happy to consider an invitation from you to address your group about this book, which describes that many traumas that my extended family went through because of the murder of my nephew in the 9/11 terrorist attacks and that also raises the question of how people get attracted to extremist ideas and what we can do to unplug extremism. Just email me at wtammeus@gmail.com whether you want me to speak or just want an autographed copy of the book. Thanks.