Home Archives Profile
The end of QAnon extremism isn't yet in sight
Is religion slowly disappearing in the U.S.?

Can the Abrahamic faiths lead to Middle East peace?

Easter/Passover weekend -- which this year come just a week after Muslims celebrated Shab-e-Barat and about a week before Ramadan -- is a good time to think about what it will take, finally, to reach something like a peace agreement between Israel and its Arab neighbors, including the Palestinian people. 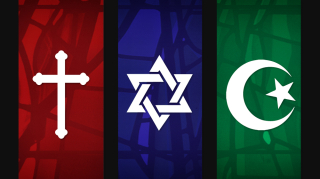 One thing it will take, says the rabbi who wrote this RNS column, is to not be so foolish as to imagine that peace will be possible if the diplomats and other negotiators trying to make it happen simply ignore the reality that three major world religions must be considered in any solution.

"(I)t will be important not only to advance normalization as a strategic objective," says Rabbi David Rosen, the American Jewish Committee’s Jerusalem-based international director of interreligious affairs, "but to bolster interreligious bonds in the specific and deeply significant name of Abraham. Such ties are an essential feature of sustainable peace."

In other words, diplomats must pay special attention to the reality that Judaism, Christianity and Islam all trace their roots back to Abram, who later became Abraham.

To ignore that aspect of this volatile situation will be to invite what we've seen now in so many ways for the past 70-plus years, a failure to find a peaceful solution acceptable to the major parties in the Middle East.

Religion, in other words, matters. And it matters a lot.

Rosen again: "Excluding faith from diplomatic processes marginalizes peace-loving religionists and their leadership, who represent the overwhelming majority, and cedes the public square to extremists, allowing them to be seen as the authentic voice of religion. Concealing the presence of moderate religious communities intensifies the impression that peace initiatives are inimical to the interests of the devoutly religious. If we do not want religion to be part of the problem, it must be part of the solution: the more visible faith is, the better."

This is certainly not to say that Jews, Christians and Muslims must give up or even water down their religious traditions and beliefs. Rather, it is to say that they must respect the differences between and among the Abrahamic faiths and to insist that everyone participating in the peace process also respects those differences -- and the considerable common ground.

There are, of course, extremist voices coming from all three traditions, but they can be, if not silenced, at least marginalized so that they don't drive the negotiating process.

The Abrahamic Accords that the Trump Administration helped to produce (credit where credit is due) can, in fact, be a good starting point for the sort of remember-religion process that Rosen advocates. And perhaps that might lead to a more bipartisan approach to Middle Eastern foreign policy in the U.S. government. I know that sounds like wishful thinking, but how about if we try it before we discard it?

THE 'FREEDOM' TO PUT OTHERS AT RISK?

What keeps many people who identify as Christian nationalists from getting vaccinated for Covid-19? This RNS opinion piece offers some answers. Including: ". . . skepticism among evangelicals has a background. Suspicion from religious conservatives regarding the COVID-19 vaccine is built on the back of their growing distrust of science, medicine and the global elite." The author also adds this: "Vaccine hesitancy is not restricted to immunization over COVID-19. In 2017, the Pew Research Center found that more than 20% of white evangelicals – more than any other group – believed that 'parents should be able to decide not to vaccinate their children, even if that may create health risks for other children and adults.'” It's weird. Christians (and others) wear masks, practice social distancing and get vaccinated not only to protect themselves but also to protect others because they're called to love those others. How is it that so many "white evangelicals" don't get the latter reason, when it is at the core of Christian faith?