Returning to the cross of Good Friday

Since Good Friday almost two weeks ago, I've been thinking about something familiar that Jesus is reported as having said from the cross: 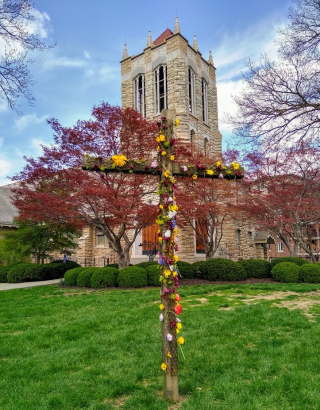 "My God, my God, why have you forsaken me?" You can find it in Matthew 27:46. As many others have pointed out, Jesus is quoting Psalm 22:1, which begins with those very words but which ends with a deep sense of hope.

I knew all of that, as no doubt many of you do. I also knew that Christianity, a monotheistic religion, insists that God comes to us in three different persons -- Father, Son and Holy Spirit or creator, cross-bearer, comforter. There are various ways like that to refer to the Holy Trinity.

The eternal mystery is that the Father is God, the Son is God and the Holy Spirit is God, making a total of one God.

And that is where we begin to understand what was happening on the cross. It's one of those cases in which there are multiple truths that don't constitute a paradox. Perhaps like the ancient story of blind men describing an elephant by touch.

There are, I think, two ways (at least two ways) of thinking about how we forsake ourselves. One way is to walk away from our true selves and participate in something that diminishes us. We forsake ourselves when we do what we know to be wrong. That can be something as small as butting in line at the grocery store or as huge as committing murder.

The other way to forsake or abandon ourselves is to give up our fear, our reluctance, our insecurities and give ourselves instead to something larger than ourselves. In a sense, we go beyond ourselves. That, says Christianity, is what Jesus was doing on the cross. He was doing something he no doubt would have preferred to avoid, but doing it for a larger cause -- to reveal to humanity the ways in which it was going astray by choosing violence, to point people instead toward the path that could and would save them from such destructive choices.

But at the moment of crisis, as death approached, Jesus the human being felt somehow so alone in that work that he needed to cry out against the abandonment he felt. So he returned to his Jewish tradition and brought forth the start of Psalm 22. It was both an acknowledgement that in the instant he felt he was in this alone but also that he had chosen the higher road of not clinging to his humanity so tightly that he would be unable to experience abandoning himself to the care of God.

There is much to explore here about when and how we forsake ourselves -- for ill or good. How we prepare for that moment. How we live through it, if we do. How we come out on the other side still somehow whole, still somehow a beloved child of God. I do not and cannot pretend to grasp all of that but I have a sense now that both kinds of forsaking, of abandoning were going on at Calvary that Friday afternoon.

And now I think it's well worth our while to remember both types of abandonment so that we ourselves may be prepared to enter into it in redemptive ways.

(The photo here today is one I took the day after Easter on the front lawn of my church, Second Presbyterian of Kansas City. Our custom each Easter is to decorate the cross, a symbol of death, with flowers, symbols of life. The next days the flowers already had begun to fade, reminding us of both the beauty and the fragility of life.)

Soon after Joe Biden was sworn in as president, I wrote this blog entry about what scholars call "civil religion." NPR's Tom Gjelten explores that subject more deeply in this piece, which asks whether our American civil religion might play a role in helping to unite our divided nation. America, Gjelten writes, "is not defined by a common ancestry, nor is it tied to an official faith tradition. But it does have a distinct identity and a quasi-religious foundation." And: "For these beliefs and principles to give definition to a nation, scholars argue, they may need the power that a religion holds for its believers. Characterizing them as a faith system elevates them beyond mere personal philosophy." The question is whether we can understand our founding documents and later traditions in a way that presents a vision of a nation that most of us can accept or whether we have become so divided that even those traditions and visions can't heal us.

P.S.: The annual Give Seven Days events in the Kansas City area started yesterday. Click here for a list of what's happening and when. I especially hope you'll join me on Monday, April 19, when I will moderate an interfaith panel. Sign up for that here.

ANOTHER P.S.: Sometimes it's helpful to view our country through the eyes of people who don't live here. In that spirit, here is a column about the U.S. written by Markandey Katju, a former justice on India's Supreme court. Markandey and I attended school together for a time in India in the 1950s. In his column, he cites individual examples of Black Americans who have succeeded in life in various ways. And we all should celebrate that. What he doesn't directly address, however, are the various systems still at play that keep many people of color from being full, welcome and equal participants in the American experiment. The wording in our founding documents about all people being created equal is still aspirational.