Home Archives Profile
Again the ancient question: Who do you say Jesus is?
Can the Abrahamic faiths lead to Middle East peace?

The end of QAnon extremism isn't yet in sight

As much as we would like to imagine that the 1/6 domestic terrorist attack on the Capitol in Washington, D.C., marked a high point for such extremism and that it's now slowly going away, the evidence suggests that would be foolish. 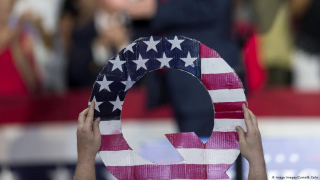 As this Foreign Policy piece notes, that kind of radicalism has been growing, especially among people who could be described (and often are, even by themselves) as fundamentalist Christians.

Indeed, fundamentalism found in any religious tradition often has its roots in fear. And many white Christian nationalists have demonstrated that they fear Black people, Muslims, Jews and much else that gets enumerated in countless conspiracy theories, especially those of the QAnon variety, such as the notions, as the FP piece says, "that mask ordinances are a part of a long conspiracy by Muslims to install Sharia law within the United States and that underground cabals of child sex slaves are funded by Jewish investor George Soros." And those aren't even the craziest conspiracy theories.

To quote the FP piece again: "One year ago, as COVID-19 raged, churches across the nation restricted or canceled live meetings. This absence of human interaction only propelled churchgoers’ thirst for online connection and provided ample time for them to read about QAnon theories on social media. Echo chambers of online QAnon networks offered a safe haven for Christians trying desperately to make sense of the world in tumultuous times. QAnon theories in many cases incorporated excerpts from the Bible, and, in fact, reading the online prophecies was easier than trying to make sense of the world alone."

It's intriguing to think about why Christians who identify as either fundamentalists or conservative evangelicals seemed to be most susceptible to such bunk. Perhaps one reason is that in such communities (not in all but in some) there is a strong preference for doctrinal rigidity. There are matters the church (or, sometimes, the Bible, when read in literalistic ways) declares to be true and of God and any deviation from that amounts to sin or heresy.

The QAnon folks seem to offer up such certitudes, though they usually are based on wild imagination rather than on facts.

As the FP article notes, "QAnon conspiracies are just the latest iteration of a long tradition of right-wing extremism, rooted in white supremacy and anti-Semitism. Christians have denigrated Jews since medieval times, depicting them as the 'eternal conspiratorial enemy of Christian faith.'” In fact, my essay on the subject of anti-Judaism in Christian history can be found here.

But what also must be faced is that religious traditions sometimes ask people to believe things that can't be proven in modern scientific ways -- that once the sun stood still for a time to benefit the people of Israel, that Jesus of Nazareth went from door-nail dead to resurrected in three days, that the Prophet Muhammad once took a night journey to Jerusalem on a strange animal. Perhaps the difference between those beliefs and the junk QAnon feeds people is that the primary purposes of religious beliefs is to get people to contribute to the welfare of others, to benefit the common good and to get right with God for eternity, whereas the main purpose of today's conspiracy theories is to encourage division, acquire power and create a world of winners vs. losers, the latter being a term former President Donald Trump liked to apply to people with the gall to disagree with him.

So we are far from done with white nationalist conspiracy people. And we would do well not to let our guard down.

RESPONDING TO HATRED OF ASIAN-AMERICANS

People of faith in recent weeks have been hitting the streets to show support for Asian-Americans in response to the brutal murders in Atlanta. This RNS story describes some of that. But it doesn't mention recent gatherings for exactly this purpose in the Kansas City area. For instance, a March 28 Kansas City event was organized by Chi Nguyễn, who is on the leadership team at The Open Table, a new worshipping community that gathers via my congregation, Second Presbyterian Church. Chi organized this vigil with Café Cà Phê and others. And the day before that there was a "Stop Asian Hate" rally in Overland Park, Kan. You'll find a story about that here. No one should be silent in the face of such racial hatred.