Home Archives Profile
As the pandemic recedes, will faith communities adjust?
The end of QAnon extremism isn't yet in sight

Again the ancient question: Who do you say Jesus is?

It should be no surprise to you that just as there are thousands of divisions within Christianity, so are there thousands of images of and ideas about who Jesus is. 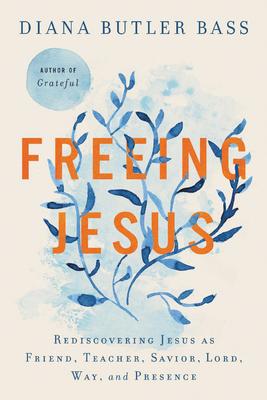 One oversimplified way to think about that is to imagine people -- and there are lots of them -- who think of Jesus primarily as the key who will unlock heaven for them. And then to imagine other people who, while not denying the salvific work of Jesus, see him much more as a model for how to live a life of love, generosity, compassion, mercy, justice and, again, love. The latter people focus much less on individual salvation and much more on communal responsibilities to care for those most in need and to fix systems that oppress people.

In her engaging new book, Diana Butler Bass describes her sometimes-painful journey between those two broad images of the Christ. Freeing Jesus: Rediscovering Jesus as Friend, Teacher, Savior, Lord, Way and Presence is what she calls "memoir theology," which she describes as "the making of theology -- understanding the nature of God -- through the text of our own lives and taking seriously how we have encountered Jesus."

In that process, Jesus becomes multidimensional, meaning he's much more than the slaughtered lamb of God whose blood keeps followers out of eternal punishment in hell by a wrathful God. The Jesus whom Bass wants readers to know is no less fully human and fully divine than that one-dimensional Jesus but is, far beyond that, the one who loves everyone and wants to liberate people from their sins and shortcomings so that they will live flourishing lives of service.

Bass, in this deeply personal book, puts it this way: "Jesus is no interstate to glory, as I had thought in high school, college and seminary. I had been so certain. Then I was not certain anymore. Everything fell to pieces. And then new life began, and love. The Jesus way is full of switchbacks, spirals and unexpected turns; mystery, paradox, unknowing, unsaying. Whenever you think you are near the center, the path suddenly veers in a different direction and you find yourself again at the edge of the way. No wonder Jesus says, 'Follow me' and 'I am the way.' But for a guide, you might never find a path, even if sometimes you are only following bread crumbs he left behind."

Bass notes that historical scholarship and church doctrine both try to describe something about Jesus of Nazareth, but, for her, neither is enough. Rather, she writes, the Jesus she knows is the "Jesus of experience." Then she describes how she has experienced Jesus in the roles of all the descriptions of him used in the book's subtitle, even while acknowledging that the list is not exhaustive and that no single description of Jesus fully captures the sacred mystery of his being.

She understandably bemoans those Sunday school teachers who failed to take seriously the theological questions she and others her age were asking. Indeed, that's an experience many of us have had. Such inadequately prepared teachers often throw children into confusion by avoiding the hard questions and by not understanding the value of doubt.

In many ways, this book is a description of how Bass moved through life embracing and then rejecting one approach to faith after another until she finally became more comfortable with mystery, with ambiguity, with uncertainty, though knowing all along how important Jesus was to her.

The chapter on Jesus as savior is particularly useful in that it should help readers understand that no single understanding of the idea of atonement fully explains what happened on the cross -- and some of those atonement theories are badly flawed. The problem she correctly identifies is that few Protestant Christians (Bass is one), and even a good number of Catholics "are not aware of the multiplicity of images for atonement and are, instead, stuck in a single story of sacrifice." Worse, she notes, under that single story lies "a strange vision of God," which is "that God is angry with humankind and must have that rage assuaged."

Bass's conclusion about Jesus certainly won't go down well with many people who identify as conservative, evangelical (a term Bass still applies to herself) or fundamentalist: "He was not killed so his death would save people; he was killed because his life had already saved them. He threatened a world based in fear, one held in the grip of Roman imperialism, by proving that a community could gather in love, set a table of plenty and live in peace with a compassionate God."

Bass has been on a long and conflicted journey as a teacher, seminary student, doctoral student and more, and her story should give hope to people who have wanted to connect with the mystery that is God but who have been thrown off the track by strict doctrinal rules and theological tunnel vision. Her self description: "The little girl in the woods, who had known Jesus as friend, had been domesticated by rules and dogma imposed from outside, reinforced by her own fears."

In the end, she declares that "what I 'know' (about God and theology) is also ultimately unknowable. We live the mystery, in ordinary days and extraordinary ones. . .And for many of us, that mystery bears the name Jesus."

There is something true, dear and life-giving at the heart of this book. As we come slowly out of this time of pandemic, if you could use exactly something like that, here it is.

WHY PASSOVER ESPECIALLY MATTERS THIS YEAR

What is Passover, which begins Saturday night, really about? Here's a lovely answer from former U.S. Rep. Gabrielle Giffords, who wasn't reared Jewish, despite having a Jewish father, but has chosen that ancient tradition. Passover, she writes, is "a story of meeting desperation with ingenuity — leaving so quickly the bread could not rise, leaving us to eat the crunchy, unleavened matzoh. It’s a generational story of saving the first born, which we tell every year, making sure to include the voices of children in our narrative." And after this last year -- and this recent violence in Atlanta and Boulder -- we badly need what Passover offers.

P.S.: Jesus (subject of the book review above) taught his followers to be servants on behalf of people in need. But recently some of those servants -- nuns working in India -- have suffered various kinds of harassments. My friend Markandey Katju, a former justice on India's Supreme Court (and an atheist), has written this good piece about how valuable such nuns are to India and making a plea to protect them. "If India is to progress," he writes, "our people must develop the spirit of service and sacrifice that the nuns have. Far from harassing them, we must give them the highest respect and learn from them." Good for Markandey.