How wealth is dividing American Catholicism

It has been clear for several decades that American Catholics do not vote as a bloc in national elections. Indeed, they have been pretty well evenly divided in presidential races. 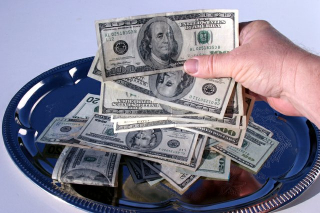 But that division seems to be hardening, and as this New Republic article makes clear, money is playing a major role in how right-leaning Catholics are able to advance their agendas.

"Although American Catholics are culturally and theologically diverse," writes Katherine Stewart, "they are increasingly split along political lines. They are the 'jump ball' of American politics, in the words of right-wing political operative Ralph Reed. They are divided over some teachings of Pope Francis, over America’s culture wars and over the right way to bear witness to their faith in public life. . .

"The hardening schism in American Catholicism is shaping up to be a test of the influence of liberal Catholicism and the liberal left more broadly. It pits a loosely organized cultural and theological movement against a well-oiled and well-funded political movement on the right — the latter a testament to conservative Catholicism’s commitment to a politics of money and power."

In some ways, similar splits can be seen in other faith communities. But among Protestants, for instance, when there's a big divide over direction, denominations tend to fracture into smaller groups. That's generally not the pattern in Catholicism. Rather, they tend to stay and fight amongst themselves. Indeed, in the same diocese you often can find Catholic congregations that identify as progressive ("Francis Catholics" is a name now employed to describe them, in honor of Pope Francis) just as you can find congregations that would identify as more conservative -- in some cases willing to take on the description of being "pre-Vatican II Catholics." That simply means that they reject many of the reforms that came out of the Second Vatican Council in the 1960s.

But as The New Republic piece reports, in American Catholicism the conservative side has access to pretty much all the wealth it needs to advance its causes: "The extreme financial imbalance is something more than merely another factor in the culture war within Catholicism. It is in an important sense the cause of the war itself."

In many ways, it's sad that faith communities, including American Catholicism, can't model what it looks like to live in peace with one another even while disagreeing about things. That's what religion, at its best, is supposed to demonstrate by example. But history shows us that it rarely works that way in any faith tradition. Sigh.

A disturbing new report from the United Nations says Islamophobia, or hatred of Muslims, has been rising in recent years. As the RNS story to which I've just linked you reports, "Opinion polling shows Muslims are increasingly seen in an unfavorable light. Citing data from other sources, the report notes that almost 4 in 10 Europeans held unfavorable views of Muslims in surveys conducted between 2018 and 2019. A survey of Americans conducted in 2017 found 30% held Muslims 'in a negative light.'” (And that was before former President Donald Trump's visceral dislike of Muslims could do much to affect public opinion.) This kind of hatred often is rooted in ignorance and fear. Beyond that, some people assume that extremists from one particular faith tradition represent all adherents of that tradition. Which, of course, is bunk. Religious life is much more complex than that.