Home Archives Profile
Are we surrounded by true prophets?
Taking new looks at the Black Church

When faith needs to be torn down and rebuilt

A few days ago, at their invitation, I spoke to members of the faculty of Central Baptist Theological Seminary about my new book, Love, Loss and Endurance: A 9/11 Story of Resilience and Hope in an Age of Anxiety.

Our general topic was religious extremism and what we can do to unplug it, which is part of what my book is about. 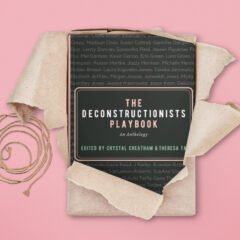 In our conversation, one of the faculty members mentioned his experience of having students enter seminary with quite rigid ideas about Christianity -- so rigid that they had difficulty imagining any other model of the faith than the one they already had. Their minds, in other words, were closed and they seemed bereft of the ability to do critical thinking, especially the self-critical variety.

After our discussion, I ran across news of a forthcoming book that might be useful in such situations, whether at a Christian seminary or elsewhere.

The story says the people behind the book describe "deconstruction as 'a hot word amongst progressive Christians' that 'embodies the personal task of ditching toxic theologies and doctrines for beliefs grounded in love, social justice and liberation for all.'”

In other words, it's the process of re-examining the religious ideas one has adopted to see if they still make sense today or whether they need some kind of revision. But, of course, once you pull apart a faith tradition, you may have little left, which then requires some kind of reconstruction -- or at least construction of something more suitable to current needs and understandings. Apparently the new book offers help with that, too.

In reality, faith is (or should be) a constant process of deconstruction and reconstruction -- unless adherents get locked into some kind of fundamentalism that imagines all questions have been answered. It's not that faithful people throw out their religion each day and start over. Rather, it's that they recognize those matters that they don't understand in a useful way and they work to fill in gaps. Beyond that, they recognize that they had previously misunderstood things that now they are in a position to grasp better.

Reconstruction is a way of being a modest theologian in that we recognize that ours are finite minds trying to grasp something of the infinite -- ultimately an impossible task, though some folks get closer than others.

In my experience, a lot of people quit on theology with, at best, a sixth-grade understanding of God and the purpose of life. A vibrant life of faith is open to new light and fresh ways of experiencing the divine. Thank goodness for seminary teachers who can help to open up their students so the schools aren't sending into the world a collection of rigid theologians with no room for new insights and no way to understand the value of doubt.

MUST WE ALWAYS SAY NICE THINGS ABOUT THE DEAD?

About the time I heard about the death of Rush Limbaugh the other day, I happened across this commentary piece in the Sydney Morning Herald. (Don't y'all read at least one Down Under newspaper every day?) The column raised the question of why it's still considered (mostly) in bad taste to speak ill of the dead. The author's questions: "Why do we take such issue with criticism of the dead, when we have no problem at all with criticism of the living? Many of us have secretly breathed a sigh of relief when a feared or despised relative has finally died. Why is articulating this relief so taboo?" Did I not feel some relief at the death of Osama bin Laden? And although I found Limbaugh helpful the few times I had reason to contact him when he worked for the Kansas City Royals doing p.r., I found his radio career mostly despicable and full of needless fury. Still, he was a human being. And if I take that away from him I take it away from myself. 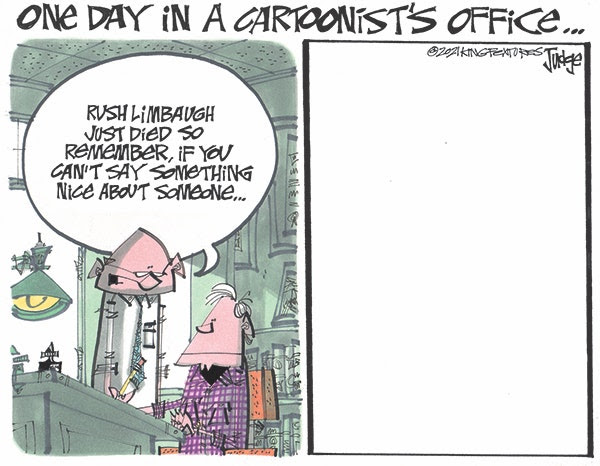 (This cartoon is by Lee Judge, my former Kansas City Star colleague, and is used with his permission.)