Each year the U.S. Commission on International Religious Freedom and the U.S. State Department issue reports (here and here) describing how religious liberty is being restricted -- sometimes brutally -- in countries around the world. 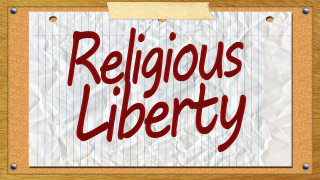 One reason they do that is that the U.S. considers religious liberty to be a foundational human right that no government should abuse. In other words, it's an important moral value for which our nation stands.

Over the years, both the USCIRF and the State Department reports have been useful, though they sometimes have differed in naming the countries they consider particularly egregious. The problem has been that these reports and the work that goes into producing them rarely get much coverage in the press.

The U.S. ambassador at-large for international religious freedom is the one whose office oversees the State Department's reporting and work in this area. Until last month, that job was held by former Kansas Gov. Sam Brownback. He was a miserable governor whose economic experiment with vast tax cutting badly injured the state, a condition from which it's only now beginning to recover. But Brownback turned out to be a pretty fair religious freedom ambassador -- not using the office, as some feared, strictly to complain about persecution just of Christians around the world. He had a broader vision than that, for which we can be grateful.

As this Kansas City Star article reports, Brownback now is figuring out what he wants to do next in life. One hopeful sign is that he says he wants to devote energy to racial reconciliation.

“I think my side, conservatives, need to put forward a racial reconciliation agenda and how we would address it,” Brownback said in an interview with The Star.

Agreed. But the devil, as always, is in the details. So we'll see.

Now that Brownback has left that office, however, the question is what the new Biden administration will do to help protect religious liberty around the world.

This story from the Deseret News explores that very question.

It quotes Rabbi David Saperstein, who used to hold the job Brownback just left, this way: “I’m confident in the Biden administration’s ability to maintain a deep commitment to furthering religious freedom even as it embraces a robust interpretation of human rights.”

Some see the promotion of basic human rights as an area of possible conflict with promoting religious liberty, given, for instance, that some people who identify as religious also believe that some rights of LGBTQ+ people should be limited -- such as the right to same-sex marriage, no matter what the U.S. Supreme Court already has ruled.

So whoever Biden appoints to fill the job Brownback held will need to find a way to promote religious liberty as well as basic human rights.

And more Americans need to be committed to paying attention and complaining in some effective way when people around the world find themselves lacking religious liberty.

LOSING THEIR GRIP ON REALITY

Clearly part of the problem in finding any sense of unity now in the U.S. is that a shocking number of people who identify as white evangelical Christians have bought into QAnon conspiracy theories. As this RNS story reports, a new study "by the conservative American Enterprise Institute reported 29% of Republicans and 27% of white evangelicals — the most of any religious group — believe the widely debunked QAnon conspiracy theory is completely or mostly accurate." We can't begin to come together when people are operating in radically separate realities -- one rooted in facts, one in fantasy. Even those rooted in facts must acknowledge that sometimes they pick and choose the facts they embrace, but at least they're not off in Bizarreland, where a cabal of child-eating pedophile Democrats controls life in the U.S.