It appears that in an effort to do something good -- teach California high school students about ethnic diversity -- state officials have made some bad judgments, at least one of which has resulted in what the author of this Tablet piece describes as cleansing the state of its Jews. 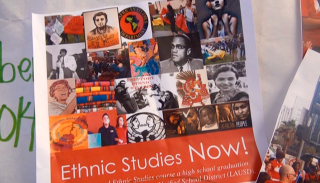 Emily Benedek writes that when the ethnic diversity curriculum was finally made public, it properly included historic U.S. social movements about which students should know. But it "also included the Boycott, Divestment and Sanctions Movement for Palestine (BDS)."

And, she notes that "BDS’s primary goal — the elimination of Israel — was not mentioned."

Beyond that, she writes, the proposed curriculum contains "a list of 154 influential people of color" but "did not include Dr. Martin Luther King Jr., John Lewis, or Supreme Court Justice Thurgood Marshall, though it included many violent revolutionaries. There was even a flattering description of Pol Pot, the communist leader of Cambodia’s Khmer Rouge, who was responsible for the murder of a quarter of the Cambodian population during the 1970s."

So the problems go beyond issues Jews and others may have with how the curriculum teaches about Jews.

But as this Jewish Journal story notes, recently "thirty-five academics sent a letter to the California State Board of Education and State Superintendent Tony Thurmond on January 21 questioning the alleged benefits of the proposed Ethnic Studies Model Curriculum (ESMC)."

Inside that story are links to different op-ed columns that evaluate the proposed new curriculum.

What we seem to have here is a lesson in what can happen when people adopt sloppy (intentional or not) means to a laudatory end. As good diversity trainers can tell you, careless or inept diversity trainers can do a lot of damage. (Speaking of that, I invite you to read Toriano Porter's recent Kansas City Star column that touches on this subject.)

High schools and colleges should be teaching students the art of critical thinking, not subjecting them to propaganda. The complaints from Jews and others about California's proposed ethnic studies curriculum should be thoroughly examined and, if necessary, changed to make sure that line isn't being crossed there.

Yes, the Super Bowl is over and the Chiefs didn't win. Sigh. But as a footnote to this past football season, here's an RNS story about how Chiefs head coach Andy Reid is shaped by his Mormon faith and how that faith, in turn, has helped to shape the National Football League. As the story notes, the relationships among Brigham Young University, the faith taught by the Church of Jesus Christ of Latter-day saints and the game of football "helped redefine both the sport and the religion."

P.S.: My late nephew, murdered in the 9/11 terrorist attacks, would have turned 51 today. His death forms the center of my new book, Love, Loss and Endurance: A 9/11 Story of Resilience and Hope in an Age of Anxiety. I've just given you a link to the book's Amazon page. But if you want an autographed copy, email me at wtammeus@gmail.com and I'll tell you how we can work that out. By the way, Kansas City's great independent bookstore, Rainy Day Books, now has hardback and paperback copies of my book available.

ANOTHER P.S.: Thanks to the Rev. Bob Hill, pastor emeritus of Community Christian Church in KC, and others for organizing a three-week online event (that ended yesterday) about Martin Luther King Jr.'s famous "Letter from the Birmingham Jail." An excellent way to celebrate Black History Month and move people from conversation to generative action.