Why does tax money go to hire congressional chaplains?

In the fall of 1990, I spent a week writing columns from Washington, D.C., just for the alleged fun of it. While I was there, I dropped in on the chaplain of the U.S. Senate, the Rev. Richard C. Halverson, whom I'd met before, just to say hello. Nice man. Lots of admirers, as you can see from the first link I gave you, which will take you to tributes paid to him at his death in 1995. 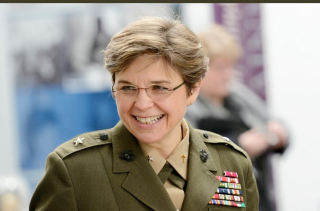 In fact, my guess is that most members of Congress and others who come into contact with any of the people who have served as chaplain of the House or Senate would have nice things to say about them. I'm sure that also will be true about Rear Admiral Margaret Grun Kibben (pictured here), who just became the first woman to serve as chaplain to the U.S. House of Representatives, as this RNS story reports.

So my issue with the chaplaincy offices in Congress have nothing to do with the civility of the people who now serve there or who served in the past. Rather, I think the office should be filled by a series of volunteers and not funded with taxes. I'm not sure exactly what the House chaplain earns as a salary now, but as this report shows about 10 years ago the salary was $172,500. (And here is the history of the chaplaincy from its own website.)

Chaplains open sessions of the House and Senate with prayer. And they're available for individual counseling and pastoral care. If it were up to me, I'd set up a system in which one person would be appointed to be House or Senate chaplain for a month, with no salary but with his or her temporary housing and meals covered (maybe by Congress, better by a faith-based foundation of some kind). And I'd make sure that chaplains of all the world's great religions would be eligible to be appointed.

I just don't like taxpayer money being spent on paying clergy -- at least in this case. It crosses the church-state line, I think.

And yet, perhaps as an indication of my inconsistency, I think it's perfectly all right to have military chaplains and to pay  them with tax dollars. Indeed, I would argue that the services they provide to people in uniform are, in many ways, essential to the readiness of our troops and, thus, to our national security. They provide full-time help, especially in times and theaters of war -- help that would be impossible to provide on a volunteer basis.

So I'm happy that Pastor Kibben (like me, a Presbyterian) has broken the stained-glass ceiling to become the first female House chaplain. But I'd much prefer she have the job for a month on a volunteer basis and then let someone else have it. Maybe I'll write my Congressman (a male holds that job) and tell him to fix this. Anyone with me?

THE RELIGIOUS MAKEUP OF THE NEW CONGRESS

Like U.S. Houses and U.S. Senates before, the new ones are made up mostly of people who identify as Christian, this RNS report notes. The question, of course, is whether that matters. And maybe the larger question is what sort of Christians we're talking about, given that they come in a wide variety. One interesting thing about the religious makeup of the new Congress is that despite the fact that some 25 percent of adult Americans now identify as religiously unaffiliated (known as the "nones"), Sen. Kyrsten Sinema, a Democrat from Arizona, is the only member of the new Congress to identify that way. Clearly the nones aren't very well organized politically. What I'll be watching in this new term is how Congress will respond after four years of a president who had no moral center at all.

P.S.: At 6:30 p.m. on Tuesday, Jan. 19, I'll be introducing my new book to a virtual audience through the Kansas City Public Library's YouTube account, which you can find at YouTube.com/kclibrary. The book is Love, Loss and Endurance: A 9/11 Story of Resilience and Hope in an Age of Anxiety. (The link on the book's name will take you to its Amazon page. This link will take you to its page on Rainy Day Books' website.) The book describes the trauma in my extended family because of the murder of my nephew in the 9/11 terrorist attacks, then explores how people get drawn into radical thinking that can lead to violence and what we can do about it. I hope you'll join me the 19th. And let others know, too, by sharing this, please.