What the damaging Vatican report can teach us

Several weeks ago, the Vatican released its long-awaited report on what church officials knew about former Cardinal Theodore McCarrick's history of engaging in sexual abuse and misconduct. (McCarrick is pictured here before he was laicized.) 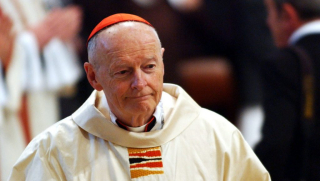 You can read the breaking Nov. 9 news story and many follow-up stories and commentaries from The National Catholic Reporter here.

The Vatican report is 461 pages long. I have waited to write about it until I had a chance to do a deeper read of it than was initially possible, and if you want to get a clearer picture of some of the ways the church failed in this (and related sexual abuse matters) affair, I urge you to read the report, too.

Among the critical problems it reveals is what has come to be called clericalism. That's a reference to the ways in which priests, bishops and other ordained church leaders grow to feel as if they are bulletproof and can get away with almost anything because people in the pews are taught to respect the authority of priests. Eventually those who are ordained begin to imagine that they are worthy of worship -- and church structures sometimes let them imagine exactly that. In fact, Pope Francis warned against that very sin recently when he installed newly named cardinals.

But religious leaders in all faith traditions are meant to be models of humility and forthright bearers of truth. To use their ordained position as a means to lord it over people and to avoid accountability for their own sins is appalling but not particularly uncommon.

What must be so galling for American Catholics is the sad truth that their own bishops, represented by the U.S. Conference of Catholic Bishops, have shown little evidence even after the release of the McCarrick report that they finally understand the wider scandal, to say nothing of the way in which McCarrick got away with his perverted actions for years.

As Jesuit Fr. Thomas Reese wrote recently, "The discussion of the Vatican report on ex-Cardinal Theodore McCarrick by the U.S. bishops at their annual fall meeting was sad but predictable — sad because the bishops failed to communicate that they understood the report’s implications; predictable in that some bishops defended (the late Pope) John Paul II against the report’s finding that the pontiff shared culpability in the McCarrick case."

Would that all priests thought about this in the way that Reese does and that the author of this column, Fr. Phillip J. Brown, does:

"We need to be guided by scientific data and well-articulated criteria in judging whether a man is suitable to be ordained a priest," Brown writes, "given the tremendous responsibility to care for others and everything else this vocation entails. There can be no room for wishful thinking or a misguided trust that sacramental grace will compensate for deficits in the human qualities needed to be a good pastor. No one should ever again simply ordain a man and hope for the best."

The Vatican report acknowledges that there were reports of misconduct by McCarrick long before he was booted out of the College of Cardinals, but it notes this: "In June 2017, the Archdiocese of New York learned of the first known allegation of sexual abuse by McCarrick of a victim under 18 years of age, which occurred in the early 1970s. Shortly after the accusation was deemed credible, Pope Francis requested McCarrick’s resignation from the College of Cardinals. Following an administrative penal process by the Congregation for the Doctrine of the Faith, McCarrick was found culpable of acts in
contravention of the Sixth Commandment of the Decalogue (Ten Commandments) involving both minors and adults, and on that basis was dismissed from the clerical state."

But this was years after the issues with McCarrick first surfaced.

The problems revealed in the Catholic scandal are not, of course, unique to that faith tradition. In recent years the public has become aware of sexual scandals in evangelical Protestant Christianity, in Judaism and even in Buddhism, to say nothing of the wildly silly notion promoted by some people who claim to be Muslim that male suicide bombers can look forward to rollicking around in paradise with 72 virgins.

Just imagine the damage this does not just to those individual faith traditions but to religion generally. Who would want to become an adherent of a religion that can't seem to keep its pants on? And what does such activity say about how this or that faith group thinks about -- and treats -- women?

What is especially frustrating about these scandals -- and many others, including financial ones involving religious communities -- is that many of us who are part of healthy faith communities know how much good they can do and actually do accomplish. And we wish others would see the good part of the story of faith in America (and around the world) instead of having their attention so focused on what goes wrong. But who can blame them for pay attention to the bad news? There is, after all, a lot going wrong.

Maybe we can all learn something from this new Vatican report, which appears to be pretty careful and thoughtful and honest about what happened, even if the report makes some people like the late John Paul II look bad. Maybe we can commit ourselves to honest assessments of what we're getting wrong in our own faith communities and start to fix them. Is that too much to hope?

Anyone who is honest about the history of the U.S. and Canada knows that Indigenous people were driven from their land when European invaders arrived. It's a long, sad story. But now some churches in both countries are going beyond simply acknowledging that their ancestors stole land from native peoples. As this RNS story reports, some of them are giving land back to Indigenous tribes. They are "participating in the growing #LandBack movement, which calls on both Canada and the United States to return land to the First Nations and Native American peoples who first lived there," the story says. That may seem like a radical step, but it certainly seems more just than what have been called "land acknowledgment" documents, which simply confess that Indian land was unfairly seized but which then don't do anything about that theft.

P.S.: As the world waits for a now-delayed official schism in the United Methodist Church, some members of that Mainline Protestant denomination aren't waiting to create something new. As this RNS story reports,  some "progressive United Methodists announced Sunday (Nov. 29) they are forming a new Methodist denomination, the Liberation Methodist Connexion, or LMX." You can read details about the direction this new denomination is taking, but my guess is this ultimately means that the UMC will wind up being divided at least three ways -- into what members would describe as a theologically conservative branch (that would continue to ban ordination of LGBTQ+ members), a middle branch that would be in favor of LGBTQ+ ordination but would not adopt some of the liberationist theology that the LMX will back and then the LMX itself. So the record of Protestantism to engage in split after split and even further splits continues. Sigh.