Home Archives Profile
The president to talk about today is: Abe Lincoln
When nuns and nones get together

Is this the world's most useless Bible? 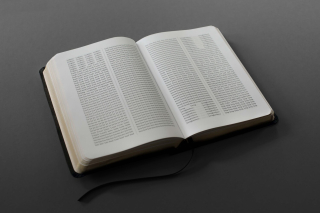 Sideline Collective, an international team of designers, writers and programmers, has just published the King James Version of the Bible (first published in 1611), but not in its usual word and chapter order. Rather, this new project, called (uncleverly enough) Bible The, rewrites the entire King James Bible alphabetically.

That's right, it gather together all the "A" words first, then the "B" words and so on. What's lost, of course, is any narrative at all, any sense of historical movement, any flow, any sequence, any sense at all.

The people with clearly too much time on their hands who did this have an explanation, of sorts.

The goal, they write, is to "turn a book into something objective. Quantifiable. Analytical. So we can study the individual parts and learn new ways to read a text. If we look at books as datasets, we can see the statistical information within the writing, and discover insights that might otherwise be impossible to find."

For instance, there's the insight that the word "no" repeated 1,394 times in print looks suspiciously like the number of times my mother said that word to me in my fourth year of life. Or maybe in the first week of my fourth year.

And why, of all things, did they pick the King James Version of the Bible? Its poetry is soaring and some of its language is deeply moving and memorable. But in the 400-plus years since its publication, all kinds of older manuscripts unavailable to the KJV translation team have turned up, which means more modern English translations are closer to the original Hebrew, Greek and (some) Aramaic used in the original texts.

In fact, why pick an English translation of the Bible for these word games at all? If something mysterious and spiritually uplifting is to be learned by rewriting the Bible in alphabetical order, wouldn't you want to use the most original manuscripts available instead of filtering it all through another language into which those words were translated at least 1,500 years after the words first were written (and in some cases much longer ago than that)?

This project sounds like the kind of idea that gets written down on a soggy napkin in a bar late at night. On the other hand, maybe you will be delighted and enlightened to know that in this blog post I have used the word "Bible" eight times, counting the one in the headline. Or maybe not.

HOW NOT TO HATE ONE ANOTHER NOW

So we see again via the national election process how radically divided Americans are. Which again raises the old question of how we live together. Advice from the world's great religions can help, but we have to be careful that we don't interpret familiar words in ways that make things worse. For instance, Matthew 5:43-44 reports Jesus saying this: “You have heard that it was said, You must love your neighbor and hate your enemy. But I say to you, love your enemies and pray for those who harass you. . ."

The problem with using that advice to live together in peace with Americans with whom we disagree is that we begin by labeling them enemies. That road leads nowhere good. Oh, to be sure, some of the people with whom we disagree see us as enemies and we should see some of them that way if their goal is to undermine the values of freedom, democracy and equality that we hold dear (even if we sometimes don't act like we care about them). But to label everyone who doesn't think like us an enemy is to make enemies where we had only adversaries or challengers. We must imagine, instead, that we are all on the same team, though we may have different strategies for winning.

So let's start in this post-election season by using more careful language, which means using words meant to clarify instead of to incite. And let's use that kind of healing language not just in public but in private, too, to build a kind of mental muscle memory.