Home Archives Profile
What's religion got to do with the election?
Is this the world's most useless Bible?

The president to talk about today is: Abe Lincoln

Springfield, Ill. -- I will get to the 2020 presidential election here on the blog eventually, but today I want to talk about my new understanding of our best-ever president, Abraham Lincoln. 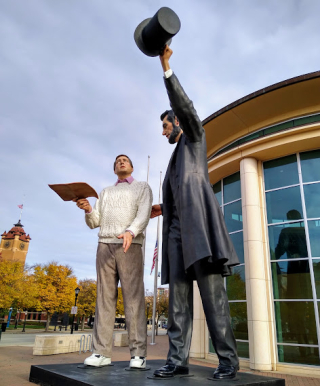 Last week I spent parts of three days here in the Illinois capitol, including a day on which I spent a full morning at the magnificent Lincoln Presidential Library and Museum. (The photo here today shows the front of it.) It opened just 15 years ago and does a phenomenal job drawing visitors into the details of this profoundly wounded man who saved the United States from a permanent split over the freedom to sell other human beings as property.

Lincoln was born into desperate poverty in Kentucky and was slammed around by events, family, fate and circumstance for decades before he finally found himself where most American voters did not want him to be -- in the presidency. What he survived to get there -- sorrow, death, poverty, more -- makes a breathtaking list.

Once, when his marriage to Mary Todd -- set for New Year's Day 1841 -- got called off, Lincoln wrote this: "Whether I shall ever be better I can not tell; I awfully forbode I shall not. To remain as I am is impossible. I must die or be better, it appears to me. . .I can write no more."

There's a small side room at the Lincoln museum in which a film shows various people involved in the creation of the museum talking about how it came together and how they understand the story they're trying to tell.

At one point in the film, Bob Rogers, founder of BRC Imagination Arts, which was heavily involved in the whole museum-creation process, decides to reveal to the audience what he hopes many will see on their own (but may not). The thread that holds together the Lincoln story as told at the museum, he says, is that Lincoln is presented as the Job of his day.

Bam, I thought. Of course. In both Lincoln and the biblical character Job we see men going through trial after trial after trial and never losing sight of their own humanity, their own hearts, their own principles. Lincoln, in losing his mother when he was quite young (nine years old) and later losing three of his four sons, carried with him a sorrow and melancholy so deep and profound that today it's likely that some psychiatrists or psychologists would recommend long treatment and that he get out of public life until he finds his footing, if ever. Like Job, Lincoln got advice throughout his life about how to proceed, including in the Civil War, when the voices coming at him are relentless and full of contradictory ideas.

As for Job, of course, he loses everything, including his children, as part of a cosmic morality play in which God allows Satan (sort of a prosecutor to measure the faith of people) to test Job. Eventually even Job's wife says he'd be better off cursing God and dying. And his several friends pretend to tell him why he's suffering and what he should do about it. They say that all this is happening to Job because of some sin he has committed -- even though from the start God calls Job a righteous man. But the radical message of the book of Job is that suffering is not a sign that someone has sinned. Suffering is simply to be expected in a life in which humans have free will.

People have misunderstood at least parts of the book of Job for a long time. We hear of the patience of Job. The truth is that Job was not a patient man. He was, rather, a righteous man who, like Lincoln so many centuries later, knew his own heart and his own worth. A couple of years ago, I reviewed here a new translation of Job in which, contrary to most translations, we find that, at the end, Job does not "repent in dust and ashes."

As I wrote there, "Indeed, Job tells God that now that he's seen and heard God he's 'fed up' and that he 'takes pity on' what translator Edward L.) Greenstein, in a footnote, calls 'wretched humanity.' In effect, Job accuses God of unfairness resulting in human pain. And he's not sorry he's said that, either."

In the end, Lincoln was proved right in his insistence that the union must be preserved, even if it meant the abolition of slavery. Lincoln was no 21st Century anti-racist. Indeed, though he detested slavery, he had trouble imagining why anyone would want there to be social, integrated racial equality. And yet he did what was necessary to make sure there was at least a small chance that one day all citizens -- black, brown, white or red -- would be treated equally under the law. That, at least, still is the goal, even though this bitter year of 2020 has shown how much farther we have to go to reach that goal.

Indeed, in some ways we've all played the part of Job in 2020. What I hope we learn from this unwanted experience is that what matters, in the end, is what Lincoln knew mattered -- that we should regard one another as precious human beings even when life itself seems determined not to treat us that way.

Now let's see if we, as a nation, can find our way from here to Jan. 20, 2021, in one piece and ready to save the country once again, perhaps not unlike the way Lincoln would have sought to save it were he here.

DID THE POPE  CHANGE HIS MIND?

The Vatican has issued statements seeking to clarify what Pope Francis said in a recent documentary about civil unions. It's what large religious organizations do to protect orthodoxy. And although the Vatican is right to insist that Francis was not changing church teaching in what he said, the reality is that he's challenging that teaching and that lots of people inside and outside the church hope the church can find a way to treat LGBTQ+ people with respect and to include them fully in the whole life of the church, including in same-sex marriage.

P.S.: As most of you know, France is in turmoil over the response of some Muslims there to what they consider provocations that they believe show disrespect for the Prophet Muhammad. My friend Markandey Katju, a former justice on India's Supreme Court, has written this piece on what French President Emmanuel Macron had to say about this as he defended freedom of speech in his country. Katju makes an interesting case supporting Macron. Do you agree?