Home Archives Profile
When nuns and nones get together
How will Joe Biden's religious faith matter?

A questioning man's journey into a strict religion 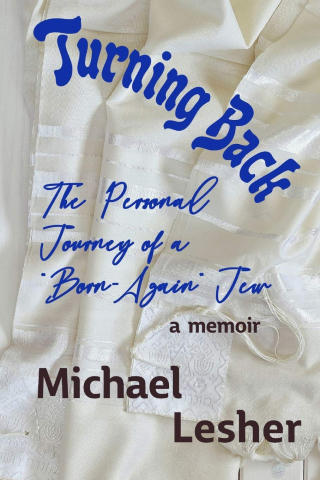 Is it simply a way to resolve mysteries by imagining a god who becomes the explanation for those mysteries? Is it a desire for order and dependability in a world that seems -- especially since the dawn of quantum physics -- increasingly inexplicable? Or do we just want assurance that our lives have meaning?

No doubt it's all of that and more. And, at base, it's the question raised in a fascinating and elegantly written new book, Turning Back: The Personal Journey of a 'Born Again' Jew, by Michael Lesher.

The Judaism in which Lesher grew up seemed to him about as interesting as old lawn furniture: "Judaism to me wasn't something one studied. It was just a feature of the landscape in which most of my friends had grown up, an old eyesore that nobody had got around to demolishing and that only visitors really noticed in the first place."

Eventually, however, he began to find in the Orthodox branch of Judaism the tools he needed to take life seriously, to minister to his existential grief, to give life an order and dependability in a world that seemed sometimes to spin wildly off its axis. This is the story of that surprising journey into Orthodoxy.

In finding that path within Judaism, however, Lesher wisely learns that what he has found is not all the answers but, rather, a useful way to ask the hard questions. He finds not false certitude but, rather, an ancient way to live with mystery, with allegory, with myth and with a god who sometimes seems simply to abandon the creation.

And yet he writes: "I'm  much more at home with people who don't claim moral certainty -- yet there's something in fundamentalist Jews and Christians that touches me in a place the others seldom reach. Maybe that's because theological certainty so often shares the same heart with the deepest personal confusions."

Lesher is a terrific storyteller. But the stories always have a purpose, which is to illuminate his religious journey and to draw readers into theirs. What Lesher eventually acknowledges is that he has become devoted to a path that is different from not only most of humanity's but also from that of most other Jews. Instead of proclaiming that he's finally found the one truth, however, he asks this hard question: "So why claim to be 'different' from the mass? This has been one of the proud themes of my new-found religiosity. But doesn't everybody claim the same thing? And aren't the claims almost always a sham?"

The problem with being so certain about matters of religion, Lesher writes, is that "Facts mean nothing to one who knows. He carries his own reality around with him." Does that remind you of anyone who just lost a presidential race?

Religious study -- especially of the Talmud -- "had both galvanized and confused me. It had galvanized me by shoring up my sagging sense of historical identity. It had also given me some intellectual space in which to work out my fascination with the questions of right and wrong. But it had confused me, too. I was confused about the stern array of limitations, boundaries, warnings. By the notion of people skimming over their lives as though life itself were a stretch of treacherous rapids whose dangers were to be kept uppermost in mind and were to be avoided as much as possible."

Part of Lesher's story has to do with awkward family dynamics. His father was essentially a secular Jew. His mother was in the Reform tradition of Judaism and couldn't imagine why her son felt he needed to move to Orthodoxy. Beyond that, one of his brothers converted to Christianity and then became devoted to a congregation of Messianic Jews. Through all that and more, Lesher had to find his own path and, at times, to infuriate family members when he stuck to it.

In the process, we find that Lesher really knows how to write. Throughout the book the reader will find golden nuggets of words and phrases. Such as: At a restaurant, "Steve and I sat under lights obscenely low, over the carcasses of sea creatures." And: ". . .staring up at me with the maddening solemnity of the dead." And: "Cruelly wrinkled, sunk into his own disorganized bulk as if he were a sack of spoiled cotton, he. . ." And: "The Hudson (river) is a flat track below, prickled with city lights."

Along the way, we learn that it wasn't so much that Lesher chose Orthodox Judaism but that "Orthodox life has chosen me." And that has had both its joys and its sorrows, including this: "It had hurt to find myself on the outs with old friends. And it hurt, too, to find myself in opposition to so many Jews -- about Judaism."

He also finds it hard to understand why people finding or returning to Orthodox Judaism, who presumably have spent much of their lives questioning religion, aren't questioning Orthodoxy "as they once questioned secular culture." That's sad, he says, because "the religious life of a truth-seeker subjects religion to constant tests."

Lesher's commitment to Talmudic study and his need to question everything is of a piece, given how a rabbi once described the Talmud to me: "It's 3,000 pages of unresolved debate."

As many of you know, I've not been reviewing many books this year because I needed time to finish my own next book, which will be published in January (more about that later). But when Lesher wrote to me and described his book, I was willing to have a look. I'm glad I did.

WHAT WOULD DYING 'THE BUDDHIST WAY' MEAN?

Families around the world, seeking "a more spiritual approach to palliative care, hospice service and chaplaincy programs," seem to be increasingly seeking out hospices that promote Buddhist teachings related to death and dying, this RNS story reports. This is another area where we can learn from faith traditions not our own.