Home Archives Profile
Is this the world's most useless Bible?
A questioning man's journey into a strict religion

When nuns and nones get together

Perhaps the least secret story about religion in the U.S. in recent decades is the growth in the number of people who identify as religiously unaffiliated. They're called the "Nones." It turns out that most of them aren't atheists but, rather, agnostics, seekers or participants in some kind of non-institutional spirituality.

Well, for the last four-plus years there's been an alliance called "Nuns & Nones." It's made up of Catholic sisters and seekers who, the group's website says, are exploring "things like community, belonging, justice and spiritual practice."

And now there are branches in several places around the country, though not, according to the website, in the Kansas City area. If there is such a group here and you know about it, let me know. And tell Nuns & Nones to update its website.

The group says this about its basic approach to life and spirituality: "We believe in a future that prioritizes spirit and care, over domination and control. Together, through a mix of spiritual formation and political education, we seek to re-wire and re-future our lives, our communities, humanity’s sense of the sacred and our world."

I've never heard of refuturing something, but maybe that just shows how much I have to learn.

The model here seems both reasonable and helpful. People who don't hold the same commitments to theology can come together and learn from one another if they're willing to be open. Could the nuns simply use this organization as a way to entice people into Catholicism or even into becoming sisters? No doubt, but my guess is that little, if any, of that is happening. What may be happening instead is that the sisters are learning about the serious questions the Nones are asking and the Nones are learning about the depth of religious commitment the sisters think is worth making. 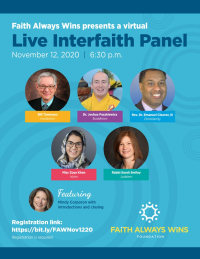 There are lots of interfaith opportunities in Kansas City and around the country that, like Nuns & Nones, can help people do spiritual exploration and help them gain an appreciation of someone else's religious commitments. In fact, you have such a chance tomorrow evening, when I'll moderate an interfaith panel sponsored by the Faith Always Wins Foundation. To register for this free event, click here.

THE SAD LOSS OF A GREAT RABBI

Let's pause for a moment to mourn the loss of Rabbi Jonathan Sacks of the United Kingdom, described in this RNS tribute by an American rabbi as a "public Jewish voice — a voice that went far beyond the local, and embraced the universal." Sacks, writes Rabbi Jeffrey Salkin, "brought the Torah out of the ark, out of the aisles of the synagogue — and into the world. He showed where Judaism could influence the way the world thought, and how its principles could transform the world." Every faith tradition could use someone like that -- not to beat others up with this or that religion's unique teachings but to share those teachings in ways that might help repair the world.

Church in Color: Youth Ministry, Race and the Theology of Martin Luther King Jr., by Montague R. Williams. In this time of racial unrest and strife rooted in the long history of white supremacist thought and action in the U.S., religious congregations have both an opportunity and a responsibility to engage young people in these matters in constructive, healthy ways. This new book, written by an associate professor of church, culture and society at Point Loma Nazarene University, can help adult leaders guide that conversation and that work. 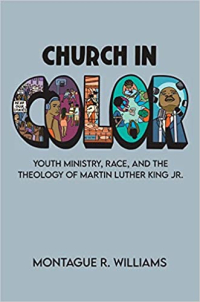 The book is based on deep research in three multiethnic Christian congregations in the northeast part of the U.S., but the findings are almost certainly useful to congregations anywhere. "If pastors and youth workers can join (Martin Luther) King in accepting that Christian faith lived well is a daily embodied protest against injustice," Williams writes, "then congregations can better connect with young people's longing to live lives of meaningful purpose and identity."

Williams is insistent that avoiding issues of race is a losing strategy, but he found quite a bit of that avoidance in the congregations he studied.

In the end, he argues, there's no use avoiding the subject of race because "young people feel the weight of white supremacy that has shaped the systems and norms in American society and the world. The last thing we want to do is help young people get used to these things and conclude that it simply has to be that way."

There's a lot of detailed academic work behind this book. It's not another book of advice for inexperienced youth pastors. It is, rather, a guide for congregational leaders who take seriously their responsibility to guide young people into redemptive Christian discipleship.