Is Christianity doomed in America?

It is far from news that -- at least in terms of percentages of the population -- Christianity in the U.S. is (and for decades has been) on the slide. 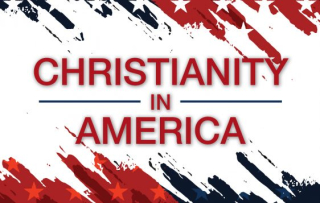 As this interesting column from Good Faith Media notes, "While many people are leaving behind evangelicalism, others are leaving Christianity altogether. According to Pew Research, U.S. citizens describing themselves as 'Christians' have rapidly dropped 12% from 2009 to 2019, while those describing themselves as 'atheist' or 'agnostic' rose 9% during that same time frame."

And though Protestants earlier in my life made up at least three-quarters of Americans, today they are below 50 percent of the population.

So the question that Mitch Randall asks in the piece to which I've linked you is this: Can Christianity be saved?

The answer to that one, it seems to me, is obvious: yes. The harder question is whether the current shape of Christian churches in the U.S. can survive. The answer to that is much more challenging. My current answer is: I don't know, but I doubt it.

Which is to say that the church must do now what it has done in every generation -- change. In my Presbyterian tradition we describe the church as reformed and always being reformed. Churches -- whether individual congregations, whole denominations or the church universal -- that don't make reforms over time die. And probably should. And I'm not talking here about the central teachings of the church but, rather, it's institutional structure and the ways in which it mediates its messages to the world outside the walls of the church.

But change is hard, but as this pandemic season is teaching us it also can be liberating. A rabbi recently told me that one thing he's really enjoyed about having to conduct worship services online instead of in person is that he's once again seeing members of his synagogue who have been ill or home-bound for other reasons.

Randall makes a revealing point in his article: "The rapid decline of Christian affiliation in the U.S. appears to parallel a continued allegiance with exclusivity, control and power." He notes that a fracturing church -- especially since the start of the Protestant Reformation 500 years ago -- is nothing new, but "there seems to be a difference in this modern-day divide. It spans the whole of Christianity. The rise of evangelicalism set into motion a modern-day split between conservative, moderate and progressive Christians. It is not tied to a denomination but reaches across the Christian landscape fracturing the whole. Only time will tell if Christianity will survive this latest divide."

I don't know how many times I've heard people say that the last seven words of the church are: "But we've always done it this way." It's truer now than ever. Congregations that aren't agile enough -- organizationally, in terms of polity and even theologically -- to speak an ancient words of truth and liberation in new ways probably are doomed.

But their experience won't be useless to the church universal. Those congregations and denominations can always be used to teach others what to avoid if they want to be part of the ongoing witness of the faith. (And that applies to congregations beyond Christianity, too.)

THE 'PROUD BOYS' AND 'ANTIFA'

I trust that many of you, too, were appalled at the overall appalling presidential debate the other night when President Donald Trump told the organization called the Proud Boys to "stand back and stand by." Who are the Proud Boys? This Jewish Telegraph Agency article answers the question of whether the group is antisemitic. And here is a BBC report on the Proud Boys and on the Antifa movement. It's good to know about these groups so you can make up your mind about politicians who support them in some way.

P.S.: Here's some better news. The American Public Square organization will honor the Rev. Adam Hamilton, founding pastor of the United Methodist Church of the Resurrection in Leawood, with is inaugural Founder’s Civility Award on Tuesday, Oct. 13 in a virtual event. You can read about it and make reservations through this link. I wrote this Flatland column about Adam a few years back. He's remarkable, and is another answer to the question raised above about whether Christianity in the U.S. is doomed. He founded his church with about 10 members in 1990 and today the congregation numbers well over 20,000.