Home Archives Profile
Can faith help us through this divisive time?
The shortage of Catholic priests gets worse

Why do Jews and Christians read the Bible so differently?

Further evidence that life is complicated can be found in what people mean when they refer to the Bible. 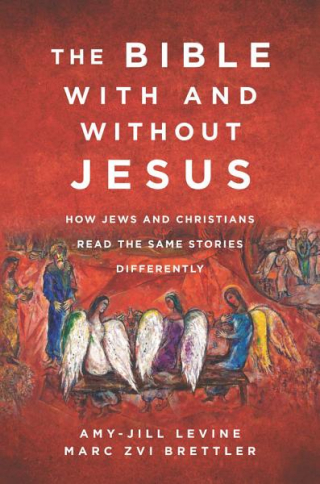 Do they speak from a Jewish perspective and mean the canon of Israel's scripture in the order found in what Jews call the Tanakh (a word that comes from the Hebrew words for the three major parts of that Bible, the Torah, the Prophets and the Writings)?

Or do they speak from a Christian perspective and mean the combination of the New Testament and what they've historically (and dismissively) called the Old Testament, which contains the same books as the Tanakh but in a somewhat different order?

Or do they speak from a Catholic, Episcopal or Orthodox Christian perspective and also include the books known as the Apocrypha?

Beyond all that, which translation do they use? And how do they know that it's being true to the original Hebrew, Greek and Aramaic found in the texts?

And even beyond all that, how do Jews and Christians interpret the very same passages in sometimes-radically different ways? And why?

There's help with these and related questions in a valuable new book called The Bible With and Without Jesus: How Jews and Christians Read the Same Stories Differently, by Amy-Jill Levine and Marc Zvi Brettler.

These two excellent scholars dig deeply into several biblical passages that Christians and Jews might well read in different -- even opposing -- ways. Their goal is not to be referees to determine which group has it right. Rather, they want people from both religious traditions to grow to appreciate how some of their favorite texts might be understood in ways they hadn't imagined. And then to respect the people who interpret the texts differently from them.

The authors pay particular attention to passages from the Tanakh that have found their way into the New Testament, including the mistranslated and often-misused word "virgin" in many Christian translations of Isaiah 7:14, a term that Christians later applied to Mary, the mother of Jesus. Indeed, Christians often read passages from the Jewish Bible as prophecy that gets fulfilled in the birth, ministry, death and resurrection of Jesus of Nazareth. Jews, by contrast, don't find Jesus Christ in those texts at all.

So not only is it helpful for Christians to understand how Jews at the time of the writing and Jews today interpret those passages, it's also helpful for Jews to grasp why and how Christians might read those same texts differently, an idea that the authors acknowledge "is not widespread in the Jewish community."

But as the authors conclude, "We are stronger when we wrestle, and when we read together. And we can, in agreeing to disagree with one reading or another, still ask, 'Give me another interpretation,' for that supply is inexhaustible."

Perhaps one of the most helpful things this book may help do for Christians is to help them be aware of the difficulties of translation. Some of their favorite passages, in fact, may be mistranslations, Levine and Brettler say. For example, there's the King James Version of Genesis 1:1: "In the beginning God created the heaven and the earth." That wording, they say, "is incorrect on several counts." You can read the book to find out why.

And, by the way, it helps to remember that the original Hebrew contained no vowels, no punctuation marks, no quotation marks and no upper- or lower-case letters. Beyond that, it was all run together right to left. So translators had to make difficult choices -- and sometimes they simply blew it.

There are lots of interesting passages that the authors explore here, including Genesis 1:26, which has led to the question of whether the Christian Trinity idea is found there. The sections on Adam and Eve, Jonah and the book of Hebrews in the New Testament are especially engaging.

If people of faith declare themselves to be "Bible believing" or some such phrase, it certainly would help if they've actually read the book and understood how it was written, by whom, when and for what purposes. This new book can help make Jews and Christians alike (to say nothing of Muslims, who are obliged to know Bible stories briefly referenced in the Qur'an) more biblically literate and, perhaps, better adherents of the tradition to which they pledge allegiance.

Pope Francis the other day endorsed civil unions for same-sex couples, and in doing so did nothing to limit the freedom of the Catholic Church, nor did he change church teaching. What Francis advocated is something fairly close to what I have advocated for years, which, in U.S. terms, is that all marriages in this country should be civil marriages to provide equal protection under the law. Once married, if a couple then wants a faith community to bless that marriage, they can go ask for that. And a faith community at that point is free to say yes or no. That way not only are all treated equally by civil law, but faith communities maintain freedom to choose. As it is now, in most weddings in houses of worship, clergy serve as both representatives of their faith and as agents of the state. Clergy should not be deputized with that civil obligation. The civil and religious roles need to be separated.

But as someone who believes that the Christian church universal should treat people of all sexual orientations equally, I'm opposed to faith communities, including the Catholic Church, that say no to same-sex marriage because I see it as a lot like saying no to, say, mixed-race marriages. Forbidding same-sex marriages (not just civil unions) in religious communities says to LGBTQ+ people that they are unworthy and unequal. Or, as some branches of the faith say directly, they are sinners with no hope of redemption unless they give up their understood sexual orientation. Creating classes of second-class citizens is a sign of unhealthy religion.

Above here today I wrote about how Jews and Christians often read the Bible differently. That's also what happens often within Christianity. Indeed, Southern Baptist leaders quickly responded to what Pope Francis said by reiterating that they believe the Bible calls homosexuality a sin.  I strongly disagree and say why in an essay you can find on my blog here. And several years ago I wrote this column for the National Catholic Reporter outlining in greater detail the views on marriage I expressed above. So the pope's statement is a tentative step in the right direction, but it's surely not what should be desired by not just LGBTQ+ folks but by all. Also, here is an article from The Conversation making the valid point that the pope's position is not new but that it matters, nonetheless. And finally, if you want more on this subject, here is an article about it from the Jesuit magazine America.