Pope Francis shows us how to use our prophetic voices

A Bible study group I help to lead has been reading some of the so-called minor prophets in the Tanakh, which Christians traditionally have called the Old Testament. 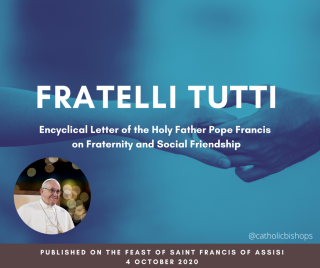 We've been trying to see what Micah and others have to teach us about using our own prophetic voices in times (like now) that require people to speak truth to power and to make clear what has gone wrong in society as we also propose ways of fixing things.

At just the right time for our group, Pope Francis issued his latest encyclical, Fratelli Tutti (brothers and sisters all), in which the pontiff shows in this age of anxiety how a prophetic voice is supposed to be used. (And by prophetic voice, I don't mean one that predicts the future but, rather, one that makes the broken realities of the present clear.)

I am not suggesting that you need to agree with the pope's analysis of conditions today and his prescription for how to improve things on the planet. There's plenty of room for argument about all of that.

But he does take up the prophetic task and he challenges a lot of conventional wisdom.  And if you aren't doing that with your own prophetic voice, why even have one?

In this encyclical, the pope zeroes in on what he sees as the inadequacies, if not failures, of what he calls "market freedom," which might well be translated as capitalism. It's not a new subject for Frances, but in this case he's responding more specifically to what's been happening to people in the coronavirus pandemic.

Before the pandemic hit, he writes, "there were those who would have had us believe that freedom of the market was sufficient to keep everything secure. Yet the brutal and unforeseen blow of this uncontrolled pandemic forced us to recover our concern for human beings, for everyone, rather than for the benefit of a few."

Then he writes this about the role of government in the economy: "Some people are born into economically stable families, receive a fine education, grow up well nourished, or naturally possess great talent. They will certainly not need a proactive state; they need only claim their freedom. Yet the same rule clearly does not apply to a disabled person, to someone born in dire poverty, to those lacking a good education and with little access to adequate health care. If a society is governed primarily by the criteria of market freedom and efficiency, there is no place for such persons, and fraternity will remain just another vague ideal."

Indeed, he says, "The right of some to free enterprise or market freedom cannot supersede the rights of peoples and the dignity of the poor, or, for that matter, respect for the natural environment. . ."

Then he hits his stride in section 168 of the encyclical: "The marketplace, by itself, cannot resolve every problem, however much we are asked to believe this dogma of neoliberal faith. Whatever the challenge, this impoverished and repetitive school of thought always offers the same recipes. Neoliberalism simply reproduces itself by resorting to the magic theories of 'spillover' or 'trickle' – without using the name – as the only solution to societal problems. There is little appreciation of the fact that the alleged 'spillover' does not resolve the inequality that gives rise to new forms of violence threatening the fabric of society."

As I say, there is plenty of room here for discussion and disagreement on specific points the pope makes. The point I want to make is that Frances is doing his job -- and we should be doing our job -- by critiquing what we see happening all around us. That's part of the task of people of any faith -- and of none -- simply because we are human.

If our social, education, political and other systems oppress anyone and we fail to call that out, we aren't doing our job. Let's be more like Pope Frances in this regard.

(In even better news, Pope Francis declares again in this encyclical [start at section 255] that the death penalty is "inadmissible" and that "the Church is firmly committed to calling for its abolition worldwide." Here, by the way, is a helpful column about all of this by Michael Sean Winters of The National Catholic Reporter.)

This year's Nobel Prize for Literature has gone to a Jewish woman, Louise Glück. This interesting article in The Forward explores whether and how her being Jewish has affected her writing. The piece describes her as "the most mysterious public presence: Over the 50-plus years of her career, she’s given few interviews, and has been as likely to write in the voice of God as that of a flower."