Home Archives Profile
Did Christianity make Judaism irrelevant?
What a compromised King David can teach us

Pope Francis said something the other day that didn't get a lot of attention, but I think it's worth unpacking a little. 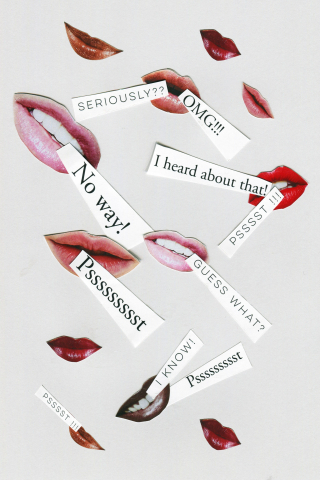 "Gossiping," he said, is a "plague worse than COVID."

He departed from his prepared text to say that. The story to which I've linked you adds this: "Francis didn't give specifics during his weekly blessing, but went on at some length to say the devil is the 'biggest gossiper' who is seeking to divide the church with his lies."

So he's using some hyperbole here, for sure. But Francis certainly has his hands full with a Roman Curia that contains, by many accounts, backbiters and dissenters -- OK, gossipers -- who can make life pretty miserable for the pontiff.

But let's set that aside and see if there's something in his words that might accurately describe a despicable human behavior that we all would do well to curb.

We can, of course, turn to scripture to find admonitions against what's called gossiping today. For instance:

"Let no corrupting talk come out of your mouths, but only such as is good for building up, as fits the occasion, that it may give grace to those who hear." -- Ephesians 4:29

"There are six things that the Lord hates, seven that are an abomination to him: haughty eyes, a lying tongue and hands that shed innocent blood, a heart that devises wicked plans, feet that make haste to run to evil, a false witness who breathes out lies and one who sows discord among brothers." -- Proverbs 6:16-19

Similarly, the Qur'an is quite explicit about the need to avoid gossip:

"Believers, avoid making too many assumptions -- some assumptions are sinful -- and do not spy on one another or speak ill of people behind their backs. . ." 49:12

"Believers, if a troublemaker brings you news, check it first, in case you wrong others unwittingly and later regret what you have done." 49:6

In this thoughtless time of social media flash responses, such scriptural advice is more necessary than ever.

The news media -- from irresponsible personal blogs to reputable outlets -- contain lots of gossip. There's even a category called "gossip columnists," who mostly trade in rumors about celebrities. They wouldn't do that if there were not a market out there for such trash.

And just the other day, while reading Isabel Wilkerson's terrific new book Caste: The Origins of Our Discontents, I ran across a way that gossip is used in any culture (ours, India's, Nazi Germany's) that has or has had a formal or informal caste system: "With few other outlets for control and power, people on the bottom rung may put down others of their own caste to lift themselves up in the eyes of the dominant (caste). . .The caste system thrives on dissension and inequality, envy and false rivalries, that build up in a world of perceived scarcity. As people elbow for position, the greatest tensions arise between those adjacent to one another, up and down the ladder."

My own experience is that gossip is engaged in primarily by people who are unsure or insecure about who they are and what value they have -- no matter what gender they are. They seem to have missed the religious idea that absolutely every human being is precious in God's sight, meaning there are no garbage human beings and no sub-humans. Maybe the pope should have added that to his off-the-text rant about gossipers.

GUESS WHO DECIDES YOUR ETERNAL DESTINY

A Catholic priest, with the support of a bishop, says in a video that Catholics who vote for Democrats in the upcoming election will "face the fires of hell." I had no idea that a Wisconsin priest was in charge of the afterlife. Good to know.