Was it God's plan to have Christianity supersede Judaism, making the latter irrelevant and obsolete? 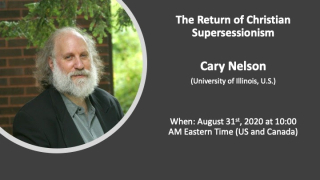 That arrogant belief, called supersessionism, has been around for a long time and has helped to create century after century of Christian anti-Judaism, the history of which I describe in this essay. Supersessionism has come in various styles over the centuries, ranging from what scholar Cary Nelson calls "hard" supersessionism to the "soft" variety.

Nelson, a professor emeritus of English at the University of Illinois at Urbana-Champaign and author or editor of more than 30 books, recently presented a webinar about all of this at the Institute for the Study of Contemporary Antisemitism at Indiana University. (A video of the webinar should be available soon on this page of the Institute's website.)

As a Christian, I found it painful to listen to Nelson describe all the ways in which Christians have, century after century, denied that Judaism matters. The fact that in recent decades, particularly in light of the Holocaust, various branches of Christianity have backed way from hard supersessionist positions is helpful, but supersessionism is far from dead, and today it expresses itself most virulently in people who believe that modern Israel has no right to exist.

To give webinar participants a bit of relatively modern historical perspective, Nelson went back to Jan. 26, 1904, when Theodore Herzl, described here as "the visionary behind modern Zionism and the re-institution of a Jewish homeland," met at the Vatican with Pope Pius X "to seek the pope's support for the establishment of a Jewish state in Palestine," as Nelson noted.

"According to Herzl's account in his diaries, which is not disputed, the pope's reply was blunt: 'We cannot give approval to this movement. We cannot prevent the Jews from going to Jerusalem but we can never sanction it. The soil of Jerusalem, it was not always sacred (but) it has been sanctified by the life of Jesus Christ. As the head of the church, I cannot tell you anything different. Jews have not recognized our Lord. Therefore, we cannot recognize the Jewish people.'"

Just over six decades later, the Catholic Church reversed that myopic and insulting view by issuing a history-changing document called Nostra Aetate (or "In Our Time"). Although no doubt some Jewish scholars and religious authorities, if given a chance, would have made some edits to some of that document's language, the effect of the document was that for the first time in its history the church said that Jews -- both at the time of Jesus and today -- should not be charged with deicide, meaning they should not be held responsible for the death of Jesus.

Since then there's been quite a bit of Jewish-Christian dialogue and, at least in parts of the church, a growing acceptance of the idea that God's covenant with the Jews is irrevocable. And yet, as Nelson pointed out in the webinar and will describe in detail in a forthcoming book, Peace and Faith: Christian Churches and the Israel-Palestinian Conflict, supersessionism among Christians still is around.

The video of Nelson's webinar gets into more details, but for my purposes in this blog post, I simply want to point out that people making religious truth claims need to be aware of all the ramifications of those claims, especially if one result is the proclamation that followers of a different religious tradition not only are wrong but should be shut up or even permanently removed.

In my essay on anti-Judaism in Christianity that I linked you to above, I note that there may not be a direct link between historic Christian anti-Judaism and the Holocaust, but clearly those centuries of anti-Jewish teachings helped to create the atmosphere in which the emergence in the 1800s of modern antisemitism became possible. And without modern antisemitism, the Holocaust is simply inconceivable.

Ideas matter -- especially religious ideas that create in adherents a false certitude about what is true. What a more peaceful world this would be if everyone remembered that we are finite beings attempting to understand something about the infinite. Given that truth, it's probably arrogant to say anything at all about God. And yet our human curiosity insists that we do say something. Just know that if whatever you say about God dehumanizes other people, making them irrelevant or making them enemies, you've gotten things dangerously wrong.

THE ANTISEMITISM BEHIND QANON

While we're on the subject of antisemitism today, the Jewish newspaper the Forward has done this story explaining the ways in which antisemitism informs the crazy conspiracy theories being promoted by a movement called QAnon, which I last wrote about here. "There is a strong current of anti-Semitism in the QAnon worldview," the article reports. "The anti-Semitic components are not incidental. QAnon may have started in 2017, but its ideology resonates with much older anti-Semitic conspiracy theories, the modern American face of an age-old and very dangerous ideology." (Side note: You may notice that I spell it "antisemitism" while the author of the Forward piece spells it anti-Semitism. Who's right? Good question, but the answer is too long to get into here. If you care, e-mail me at wtammeus@gmail.com and I'll explain why I choose the un-hyphenated version.)

P.S.: Speaking of attacks on people because of their religious tradition, MSNBC host Joy Reid should be ashamed of herself for ignorant and hateful words she uttered on air the other day about Muslims, as described in this RNS column condemning her. The column says she "compared President Donald Trump’s seeming support for those committing violence at protests to 'the way Muslims act.'” At best it was misguided Islamophobia. As the authors of the RNS column say, "the Institute for Social Policy and Understanding found in a survey two years ago that American Muslim adults reject violence more than any other group in the U.S. (And) American Muslims are more likely than the general public to reject violence against civilians by the military as well as by an individual or small group." People with prominent public voices should know the facts before they speak. Reid's response to the criticism she's rightly received for this has been inadequate.

ANOTHER P.S.: I am a guest on the episode of Mindy Corporon's "Real Grief -- Real Healing" podcast that was released Saturday. We talk about the 9/11 terrorist attacks of 2001 and the shape grief and healing can take. You can listen in here.