Home Archives Profile
What religion has to do with this time of racial unrest
Do you believe in 'faithism'? I hope not

Some think the Holocaust happened in. . .Australia

The Holocaust is the most famous genocide in history -- and it happened within the lifetimes of many people who still are alive. 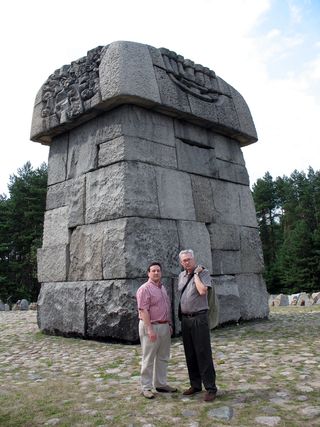 And yet a new 50-state survey of millennials and members of Gen Z finds what must be called appalling ignorance about how Germany's Nazi government murdered some six million Jews along with millions of others in World War II.

-- 63 percent of all national survey respondents did not know that some six million Jews were murdered.

-- More than a third of those respondents thought that only “two million or fewer Jews” were killed.

-- And nearly half of all national respondents (48 percent) could not name any of the more than 40,000 concentration camps or ghettos established in World War II.

And on and on in this survey conducted for the Claims Conference (the Conference on Jewish Material Claims Against Germany). That agency, established in the early 1950s, is responsible for negotiating with the German government, as the agency's website says, "a program of indemnification for the material damages to Jewish individuals and to the Jewish people caused by Germany through the Holocaust."

The good news in the survey about the Heart of America is that Kansas was tied for the fifth highest ranking among the states with the most knowledgeable respondents, while Missouri was not in the bottom 10. That may reflect well on the decades of work by the Midwest Center for Holocaust Education (I serve on its voluntary Council of Advocates). The Missouri survey results are found here. And the Kansas results are here.

But clearly more education is needed. Studying this history -- or any history -- has several purposes, and among them is helping all of us know how we got to where we are today. We cannot understand our present without knowing our past. And we will not be able to avoid the errors and disasters of the past if we ignore that past.

Holocaust denial and the rise of neo-Nazis in our time find some their roots in the kind of stunning ignorance displayed by the respondents to the Claims Conference survey.

Anti-Judaism and antisemitism are the results of what may be humanity's oldest hatred. Such hatred moves people to deny the full humanity of other people by calling them such terms as "sub-human." And once someone is in that category, of course, it's easier to countenance his or her extermination.

If you have members of your family or your faith tradition who would do badly on this Claims Conference survey, I hope you'll share it with them. And I hope you'll help them overcome such destructive ignorance.

(The photo here today shows Rabbi Jacques Cukierkorn and me on our visit to the Treblinka death camp in Poland as we worked on our 2009 book, They Were Just People: Stories of Rescue in Poland During the Holocaust.)

New research suggests that religious congregations that consider themselves more in line with progressive politics have increased their political activity a lot more in recent years than congregations that consider themselves more conservative. The study, done by teachers at the University of Notre Dame and Duke University, "finds that the very congregations that should have increased their mobilization the most under Trump in fact increased it the least, including on issues for which Trump has strongly advocated, like immigration and endorsing candidates," this press release about it says. Among the congregations most politically active, the study finds, are Black Protestants.

P.S.: The Kansas City area Christian youth ministry, YouthFront, like many agencies, has struggled through this pandemic period, but has planned a free virtual reporting and fund-raising event on Thursday, Oct. 22, called "A Story to Tell: A Year of Challenge. A Night of Hope." That link will get you to a page to register. Just FYI, my daughter Lisen is the organization's development director.