A few months ago, here on the blog, I wrote about what researchers might find now that the Vatican archives covering the papacy (1939-1958) of Pius XII (pictured here) are being made public. 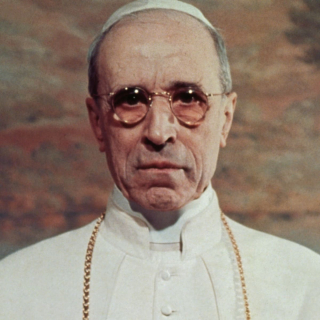 One of the early results has to do with what this Atlantic article calls the "private discussions behind both Pope Pius XII’s silence about the Nazi deportation of Rome’s Jews in 1943 and the Vatican’s postwar support for the kidnapping of two Jewish boys whose parents had perished in the Holocaust." It was written by Pulitzer Prize-winning historian David I. Kertzer. He won the prize for his terrific book called The Pope and Mussolini.

The Atlantic article is long, detailed and disheartening -- but perhaps not unexpected, given the realities of the depth of antisemitism in Europe in that era and given the ponderously slow way that change traditionally comes to the Vatican and, thus, to the Catholic Church.

"In light of the publication of this massive trove of documents," Kertzer writes, "the claim has been made that nothing much new will be learned about the pope’s silence during the Holocaust from the recent opening of the Vatican archives. But scholars need not have worried about a lack of new material. . .The new discoveries provide ample grounds to believe that the full story of Pius XII and the Jews remains to be written.

"It would only be after Pius XII’s death that Church attitudes toward the Jews would change in a meaningful way, thanks to his successor John XXIII, who convened a Vatican Council devoted in part to rooting out the vestiges of medieval Church doctrine on the Jews. The culmination of those efforts came only after Pope John XXIII’s death; in 1965, the Second Vatican Council issued the remarkable declaration Nostra Aetate. Reversing long-held Church doctrine, it called on the faithful to treat Jews and their religion as worthy of respect."

Some years ago, portions of the archives covering the papacy of Pius XII were unveiled. But it turns out they were carefully redacted, meaning certain documents were withheld -- and now we see more clearly why.

Kertzer explains: "No aspect of the pope’s attitude toward the Jews has received as much attention as the controversy over his silence during the war — his failure to denounce the Nazis and their accomplices for the systematic slaughter of Europe’s Jews. In an effort to respond to critics, it was (Giovanni Battista) Montini (one of Pius XII's chief deputies) himself who later, as Pope Paul VI, commissioned a group of Jesuit scholars to pore through the Vatican archives — which have remained closed to other scholars until now — to bring to light all relevant documents regarding the pope’s and the Vatican secretary of state’s actions as they considered how to respond to the unfolding horrors of the Second World War. This resulted, from 1965 to 1981, in the publication of 12 volumes filled with thousands of documents. Volume 9, devoted to how the Holy See sought to help the victims of the war in the year 1943, contains 492 documents."

But what was missing -- described in detail by Kertzer -- reveals an deep anti-Jewish current in the Vatican that, by today's Catholic standards, looks despicable. So this is painful stuff for the Catholic Church, but it's absolutely necessary to have these documents so that everyone can know the history, if for no other reason than not to repeat it. So good for the church for finally unveiling these sorry secrets.

THE LOSS OF A BEAUTIFUL LIFE THAT MATTERED

Actor Chadwick Boseman, who just died, was an authentic and consistent man of faith both in private and in the public eye, this RNS column asserts. As the Rev. Tyler Burns writes in that piece, "Both his stardom and his real self seemed a synthesis of pious faith and an unwavering commitment to his Blackness. Over his short career, he committed himself fiercely to bringing our heroes to life, to remind us to appreciate their legacy. His sweat-drenched portrayal of music icon James Brown in 'Get on Up' and his defiant performance as the barrier-breaking baseball star Jackie Robinson in '42' are just two examples of his choice to honor the legacy of those who came before us." To me, the sad thing is that Boseman didn't speak about his cancer much so that his fans could have walked with him on that journey and so that he could have encouraged others to get checked. But that's a highly personal decision that no one has a right to criticize.

P.S.: I wrote this column for ReadTheSpirit.com this week about the upcoming 19th anniversary of the 9/11 terrorist attacks and how we should be responding all these years later.