What religion has to do with this time of racial unrest

In many ways, the ongoing story of protests in American streets against racial injustice has deep roots in religion. That's certainly true of misguided and misused religion that tolerated, if not actively encouraged, slavery -- and then, when the Civil War was over, provided cover for whites in the South to justify crushing Blacks' hopes for freedom, hopes that had been encouraged by Reconstruction. 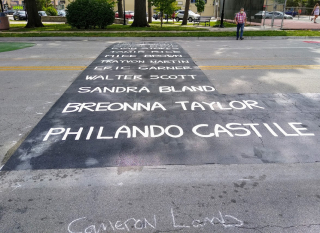 To get deeper into all of this today, I'm going to link you to two helpful articles. This one from The Conversation is about how faith and spirituality run deep in the Black Lives Matter movement. And this one, from The Atlantic, explores the possibility of a "next Reconstruction," given the failure of the first one 150 or so years ago.

In the first piece, two scholars who have studied the #BLM movement for five years have concluded that "BLM was not only a movement seeking radical political reform, but a spiritual movement seeking to heal and empower while inspiring other religious allies seeking inclusivity."

(By the way, the BLM co-founder just denounced televangelist Pat Robertson for claiming that the organization is "anti-God.")

The Atlantic piece, which describes how and why Reconstruction failed after the Civil War, quotes Frederick Douglass making a point undergirded by religion: “In whatever else other nations may have been great and grand, our greatness and grandeur will be found in the faithful application of the principle of perfect civil equality to the people of all races and of all creeds, and to men of no creeds.”

It was a hopeful, aspirational statement, not a description of reality back then, and it found its roots in the religious idea that every human being is a child of God and precious in God's sight. The political scientist Glenn Tinder, in his book, The Political Meaning of Christianity, calls that idea the "spiritual center of Western politics."

Adam Serwer writes this in the Atlantic piece to which I've linked you above: "At the height of Reconstruction, racist horrors produced the political will to embrace measures once considered impossibly idealistic, such as Black male suffrage. Many Black Lives Matter activists have a similarly radical vision."

But then he notes this: "Believing in racial equality in the abstract and supporting policies that would make it a reality are two different things. Most white Americans have long professed the former, and pointedly declined to do the latter. This paradox has shown up so many times in American history that social scientists have a name for it: the principle-implementation gap. This gap is what ultimately doomed the Reconstruction project."

One reason Americans are struggling today over racial justice issues is that our predecessors failed to fix things after the Civil War, even with its post-war constitutional amendments (XIII, XIV and XV). That sad story is told in great detail in Ron Chernow's book Grant. One of the stories Chernow tells is about how, in Reconstruction, the governor of Mississippi, Adelbert Ames, pleaded with federal officials to send troops in to protect Black people from vicious, marauding whites who were following the ideas set forth by Alexander Stephens, vice president of the Confederate States of America, who said that the confederacy's corner-stone "rests upon the great truth that the negro is not equal to the white man; that slavery subordination to the superior race is his natural and normal condition. . .Subordination is his place. He, by nature, or by the curse against Canaan, is fitted for that condition which he occupies in our system."

What was the "curse against Canaan"? Another misreading of scripture. You can read about it here. The idea that Noah cursed his son Ham's son Canaan somehow led to the bizarre idea that Ham and Canaan were Black and that from that point on Blacks would be enslaved or in any case not equal to whites. It was theology gone mad, but the idea still is around today.

President Grant allowed his racist attorney general to handle the plea from the Mississippi governor, and that meant federal troops did not intervene to protect Black citizens there. As Chernow writes, "Disheartened by Grant's refusal to rush troops to Mississippi, Ames sat brooding and besieged in the governor's mansion in Jackson. He concluded that Reconstruction was a dead letter, white supremacists in his state having engineered a coup d'etat."

The Atlantic article adds this to that story: "Retreating from Reconstruction, these Republicans cast their objections to the project as advocacy for honest, limited government, rather than racism. But the results would ultimately be the same: an abandonment of the freedmen to their fate. . .Local authority was ultimately restored by force of arms, as Democrats and their paramilitary allies overthrew the Reconstruction governments through intimidation, murder and terrorism, and used their restored power to disenfranchise the emancipated for almost a century."

(It helps to remember that the Republicans back then were considered the progressive party while the Democratic Party was the cordial home of white supremacists. All that's pretty much reversed now. Abe Lincoln must be rolling over in his grave.)

If bad theology led to crazy ideas like the curse of Canaan and like using scripture to justify slavery, maybe good theology can help us find a way toward the day when racist systems are dismantled and all people are seen as of ultimate worth. But that won't happen by accident.

(The photo above here today is one I took of the Black Lives Matter community art on Brookside Boulevard just south of 63rd Street in Kansas City.) 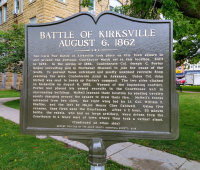 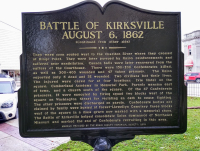 (Just as an aside, although the Civil War ended 155 years ago, there still are monuments and markers all over the country -- some of which, such as those honoring traitors like Robert E. Lee, are coming down. While in Kirksville, Mo., last weekend, I ran into this double-sided sign describing a Civil War battle that took place right there on the town square. Read it and you'll know that history, too. Or read the article about it to which I've linked you. Or, heck, go to Kirksville. And while you're there say howdy to my granddaughter at Truman State University.)

THE HIGH HOLIDAYS ARE RATHER DIFFERENT THIS YEAR

Judaism's High Holidays, which begin Friday night with Rosh Hashanah, have a new look in this pandemic season, as this Washington Post article explains. Every faith tradition has been affected in various ways by Covid-19, though not all of the changes have been terrible. Here and there congregations have seen at least a little bit of good come out of all the disaster, as I wrote earlier this summer in this Flatland column.

P.S.: How sad that U.S. Supreme Court Justice Ruth Bader Ginsburg died at the start of the Jewish High Holidays. She was exactly the kind of justice we need on that court.