Home Archives Profile Subscribe
What did we do to deserve the pandemic?
It's past time to scrap the term 'Judeo-Christian'

Shining a light on Jesus' most famous sermon

Chapters five, six and seven of the gospel of Matthew in the New Testament contain what has been called Jesus' "Sermon on the Mount." And even though scholars think the contents of that so-called sermon were delivered in smaller bites over time and not all at once, it still remains one of the most memorable and influential sections of any of the four gospels. It contains not only the Beatitudes but also a version of what Christians today call the "Lord's Prayer," or the "Our Father." 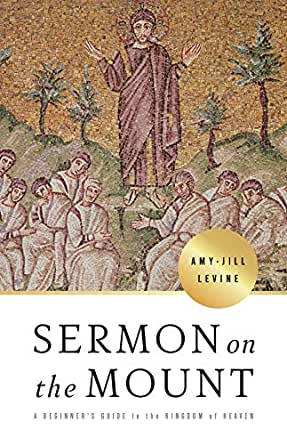 My guess, however, is that not many Christians ever have focused intently just on those three chapters and, through that study, unpacked all that is there. Now there's a new book that does just that. It's Sermon on the Mount: A Beginner's Guide to the Kingdom of Heaven, by Amy-Jill Levine, the well-known and highly regarded New Testament scholar at the Vanderbilt Divinity School. The book is both revealing and insightful, and not only for "beginners."

Levine's approach to the New Testament is shaped not just by her rigorous scholarship but also by the fact that she grew up Jewish (though as a girl she went to a Catholic school for a time) and she still attends an Orthodox synagogue. Which helps to make her (and, through her, readers) more sensitive to the reality that Jesus was a Jew speaking mostly to other Jews and drawing on what Levine regularly refers to as the Scriptures of Israel, which now have become known as the Hebrew Bible and which Christians often call the Old Testament. (Levine says it's OK for Christians to do that, but I dislike that terminology because I think it's both dismissive and supersessionist.)

Levine also brings to this study of Jesus' most famous sermon a lovely sense of humor, which should not surprise anyone who ever has heard her speak. In what other book on this subject by a serious scholar are you apt to run into Popeye, grits, liquid eyeliner, Girl Scout cookies and your local 7-11? Those golden nuggets are nicely buried in the text.

In this Jesus sermon, Levine writes, "Jesus is not a Christian talking to other Christians; he is a Jew talking to other Jews. He's not telling his fellow Jews to do away with Torah. That would be ridiculous. Rather, he's telling them that he has insight into the heart of Torah, and they would do well to listen to him."

At the very beginning of his ministry, Jesus proclaimed that the "Kingdom of God," or the "Kingdom of heaven," has come near and that people can live in that reign today by living lives of compassion, mercy, justice and love. As Levine rightly notes, "the kingdom of heaven is not some abstract place with pearly gates and golden slippers, harp music and a bunch of angels flapping their wings. The kingdom of heaven occurs when people take the words of Jesus in these chapters to heart and live into them. . .(T)his kingdom is already available to us, already manifested when we enact God's will on earth as it is done in heaven."

One of the ways to do that is to recognize the image of God in others. As Levine points out, "we have to see the image of the divine in those it would be so easy to hate: the Nazis who are among us to this day, the terrorists who seek to die a martyr's death by blowing up themselves and all around them, the child molester. They, too, are human beings." Which is part of what makes the religions that preach this approach so difficult to follow.

So the Sermon on the Mount is the call of Jesus to set up "a new family or a new community," Levine writes. And the good news is that "anyone can be part of this community."

Levine's personal grounding in Judaism helps her recognize what anyone reading the Sermon on the Mount should recognize, which is that "knowledge of the Scriptures of Israel is essential for understanding" Matthew, to say nothing of the other three canonical gospels.

Thus, Levine's explanations of the Beatitudes, the Lord's Prayer and other parts of the sermon should be especially helpful for Christians who have a tendency to forget -- or, worse, a prejudice against -- their Jewish roots.

Indeed, she calls the Lord's Prayer "a magnificent Jewish prayer, echoed in a number of other Jewish prayers still used to this day. . ." (italics hers).

She also emphasizes a point that Kansas City Pauline scholar Mark D. Nanos has noted in some detail in his work, which has to do with why the Apostle Paul argued that Gentile people of his time who decide to become followers of Jesus need not first convert to Judaism.  As she writes, "For Paul, the messianic age -- which he saw as beginning with the Christ's resurrection -- had begun, and in that messianic age, Jews and Gentiles both worshiped the God of Israel. Were the pagans to convert to Judaism, then only Jews would be part of that grand chorus."

There is much more here in these 128 pages, but what also strikes me about this work is that it's not simply a terrific scholar shining light on an important part of the New Testament. It's also that very scholar urging readers to live by the lessons Jesus was teaching. Time and again Levine pushes readers to internalize Jesus' words and make them come alive.

"Any faith that does not manifest itself in works is not faith," she contends, "it is complacency and self-satisfaction. It is not salt, because it contributes nothing to the earth. It is not light, since its shining is only for self-reflection." Precisely.

It won't surprise me if this small book quickly gets adopted by study groups that are serious about grasping the deep meaning found in the Bible. If they listen to Jesus as Levine understands him they will become more deeply committed people of faith who are changing the world for the better.

FEMALE POWER IN THE VATICAN?

Here's what I and some others will count as good news in the Catholic Church: Pope Francis has appointed six women to top Vatican financial positions. The jump from there to female priests is a long, long, long one -- and may never happen. But it puts the Vatican in position to draw now on the wisdom and experience of women, most of whom have been excluded from top Vatican jobs maybe since the days of St. Peter.