Over the past few years I've gotten to know Alvin Rosenfeld, director of the Institute for the Study of Contemporary Antisemitism, based at Indiana University. We met a few years ago when he and I both were on a panel discussion at his school. 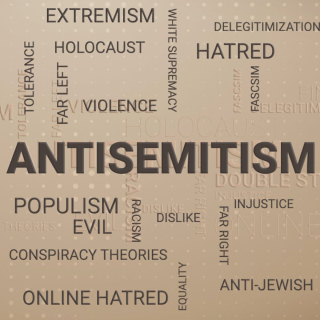 His institute has been putting on webinars about various subjects, including one I attended on Monday, "Denying Jewish Self-Definition: The Latest Trend in Campus Antisemitism in America and What Can Be Done About It?" with Tammi Rossman-Benjamin, who is co-founder of the AMCHA Initiative. The link I just gave you is a one-page description of the group, which describes itself as "a non-profit organization dedicated to investigating, raising awareness about, and combating acts of antisemitism at institutions of higher education in America." The group's website is here.

As Rosenfeld explains it, "Amcha is a Hebrew word meaning 'your people' or 'your nation' (i.e. the Jews are God’s people). It also has the connotations of 'ordinary people,' 'the folk,' not the elite. In short, it’s a collective term for everyday Jews."

Rosenfeld wanted me to know about this seminar as well as one coming up Aug. 31 on "The Return of Christian Supersessionism." You can find information about these seminars here.

So in turn I wanted you to know not just about the center Rosenfeld heads but also the AMCHA Initiative.

At the recent webinar, Rossman-Benjamin described the work of the agency and how it tries to investigate and keep track of antisemitic and anti-Zionist acts against Jewish students on college campuses around the nation -- acts, she says, that have been increasing in recent years. Well, there has been something of a reduction of classic antisemitic acts on campuses, she says, but, in their place, a rather alarming increase in what her agency calls anti-Zionist acts. You can follow her main points by looking at this PowerPoint, which she used in her presentation.

Anti-Zionists acts are committed by people who are not leveling legitimate criticism at the Israeli government's policies and actions but, rather, who think that Israel should not even exist as a self-described Jewish state.

Clearly some of this is coming from zealous supporters of the Palestinians who think Israel -- and particularly the Israeli government under Benjamin Netanyahu -- has badly mistreated Palestinians. There is much to debate on this matter, and I agree that Israel (and especially Netanyahu) has done some indefensible things (as have some Palestinian leaders). The AMCHA Initiative tries to make sure that honest policy disagreements don't turn into destructive antisemitic acts against American Jewish college students.

Modern Israel turned 72 this year, and has had to defend itself all that time against people who want it to disappear. The Israeli-Palestinian conflict, which is a subset of the Arab-Israeli conflict, continues to roll along with no realistic solution in sight. American, Israeli, Palestinian, Middle Eastern and world leaders have all failed in this.

So no wonder there's been sharp disagreement about what to do. But Rossman-Benjamin is right that such disagreements should not degenerate into antisemitism, one of the world's oldest hatreds.

By the way, speaking of antisemitism, Alvin Rosenfeld called my attention recently to a publication called Profiles in Catholicism, which recently produced an issue on antisemitism. One of the people interviewed was my friend Rabbi Michael Zedek, now of Chicago, but formerly rabbi at Temple B'nai Jehudah in Kansas City. You can read it here.

The subject of antisemitism today may be appropriate given this piece in the Forward about members of Joe Biden's family who are Jewish. I wasn't aware of it until I read the article, but it reports that "all three of Biden’s children — Beau and Hunter, his sons with his first wife, Neilia Biden, and Ashley, his daughter with current wife Jill Jacobs Biden — married (Jews)." My own extended family is ethnically diverse -- with nieces married to people of Chinese, Korean, Filipino and African-American backgrounds. And such diversity, whether ethnic, racial or religious, can help to give one an expanded view of humanity and to keep one from becoming insular.

P.S.: If some day your mind goes blank and you can't figure out where to find my blog, please know that it now also appears on my Amazon author page, which is here. Heck, go there anyway. You might find that you don't own some of my books. What a shame that would be.