Home Archives Profile
What's behind the surge in anti-Catholicism?
What did we do to deserve the pandemic?

Any Americans familiar with the Civil Rights Movement know that the historically black church provided much of the leadership for it. 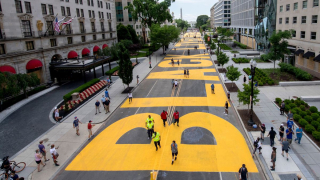 The best and most famous example is the late Rev. Dr. Martin Luther King Jr.

And when King was assassinated, it was, in many ways, mostly black clergy in Kansas City who spoke with prophetic voices but who also sought to calm a city that had deteriorated into rioting. My Flatland column about that is here.

So let's move ahead several decades to the current Black Lives Matter movement and ask what role communities of faith, especially black churches, are playing.

One answer -- not as much as before -- is found in this account by reporter Kelsey Dallas of the Deseret News in Salt Lake City.

For instance, she quotes the Rev. Watson Jones III, pastor of Compassion Baptist Church in Chicago, as saying that religious leaders are generally welcome to be part of the Black Lives Matter movement, but they don’t call the shots: “We’re in there, but we’re not at the forefront of it,” he said. “The church has lost some of its prophetic voice. It’s lost some of its fervor.”

In some ways this is a reflection of the slippage of religion generally in the U.S. As Kelsey Dallas writes of religion:

"It’s also lost some of its cultural status, said Aldon Morris, a professor of sociology and African American studies at Northwestern University. Activists no longer feel like they need the power of religious institutions behind them in order to change the world.

“'The role that religion played in the civil rights movement cannot be replicated in the movements of today,' he said."

In some ways, that's a sign that the black church has succeeded in getting people to internalize and act on its message of racial equality. Many non-church folks now get it and don't feel they need to church to organize activities and other responses to the situation on the ground today.

Beyond that, at least in my experience here in Kansas City, it's worth noting that some predominantly white congregations have become much more active in trying to understand and then unplug systemic racism. There's still a long way to go with all that, but it's been happening even though most congregations have been unable to worship in person together or to hold classes and other activities except via the internet.

What role will people of faith play in the long run as the Black Lives Matter movement evolves from street protests to other activities? Good question. But so far I don't think anyone knows. What we do know is that people of faith have prophetic voices that they should be using to call attention to what's wrong in our culture and to how it might be fixed.

A FAITHFUL FAREWELL TO LEWIS

Speaking of people with prophetic voices, in many ways the late Rep. John Lewis lived out his Christian faith in quite public ways. So it was fitting that at his funeral service the other day there were many indications of how seriously he took his faith. This RNS story itemizes some of them. But we still don't have a good answer to this ancient question: Why do the best people seem to leave us too soon? By the way, here's a link to the op-ed piece Lewis wrote for The New York Times just before he died. It's vintage Lewis.