Home Archives Profile
What has support of Trump cost and lost?
Can multiracial religious congregations work?

Why knowing U.S. Protestant history is so vital now

In the 15th chapter of the book of Acts in the New Testament, there's an account of a dispute among early followers of Jesus. 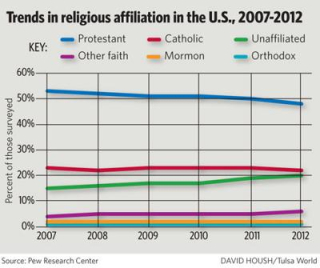 One side said that gentiles should be required to convert fully to Judaism (meaning, for men, circumcision, and, for all, certain dietary restrictions) before they could join the new Jesus Movement, which was still within Judaism. The other side said that wasn't necessary because Jesus came for all, Jews and gentiles alike.

After hearing the arguments, the leader of the mother church in Jerusalem, James, brother of Jesus, did what all of us need to do today. He looked at -- and drew from -- history. In the James case, he quoted something from the prophet Amos, found in the Hebrew Bible, to declare that the second group was right: gentiles didn't first need to become fully converted Jews to be part of the Jesus Movement that eventually would split off from Judaism and become Christianity.

For our fraught time, one lesson is that we must know our own history and be instructed by it as we seek to make changes in social and religious systems in response to the civic turmoil in the wake of the murder of George Floyd by a white police officer in Minneapolis.

This is especially true for Protestant Christians, who from the start of our country until quite recently have dominated the American religious landscape, though the latest estimates show that Protestants now constitute not quite 50 percent of the population.

Which is why it's important to read articles like this one from The Conversation.

"As the dominant religion in the U.S.," writes Tiffany Puett, who teaches religious and theological studies at St. Edward's University, "Protestant Christianity’s dominance has long been enmeshed with the racial dominance of whiteness – white supremacy."

The actions and thinking of many of our nation's founders, she writes,  are "part of an old, defining narrative of America as chosen by God, rooted in a white Anglo-Saxon heritage and exceptional in its devotion to values of liberty and individual rights – a narrative of American exceptionalism. This narrative has also supported the notion that the ideal or 'true' American citizen is essentially white and Protestant. . ."

So if those of us who are both white and Protestant today want to be engaged in the anti-racism work that is beginning to happen more broadly in our culture, we must acknowledge that history. That doesn't mean we personally take the blame for what our ancestors did and thought. But it does mean we need to figure out whether and how that old racist thinking might still be present somehow in our congregations and other religious organizations today.

After all, we can't effectively change course if we don't know how we got here and, thus, where we are.

If you need another resource to help you with all this, let me recommend The Color of Compromise: The Truth About the American Church's Complicity in Racism, by Jemar Tisby. I reviewed this book here for The National Catholic Reporter.

A TIME FOR LISTENING -- AND MODESTY

In this difficult time in our American culture, there are lessons about disagreement to be learned from the Talmud, a rabbi writes here. "We could transform our society if we were willing to recognize how complicated the story really is — if we learned to listen deeply and left room for dissenting voices or different approaches around the table," write Will Berkovitz. True. Another rabbi once told me that the Talmud amounts to 3,000 pages of unresolved debate, and the lesson is never to imagine that your understanding of the problem is the final one. Now's a good time to remember that.