Home Archives Profile
When the idea of individual sin isn't enough
What has support of Trump cost and lost?

This guy says he died but God sent him back

Because of all the coronavirus deaths in the U.S. and around the world in recent months, lots of us have been thinking about death more than usual. 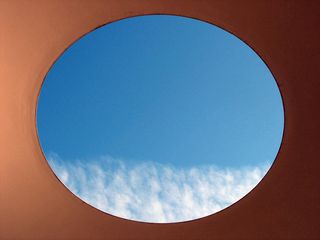 (For lots of Americans, usual is never. For some reason many Americans seem to think death is optional. They'll have a rude un-awakening some day.)

When people think about death, they almost automatically think about the possibility of an afterlife, given that most of the great world religions propose some version of that.

So maybe it should be no surprise to read occasional stories about people who have had near-death-experiences and who say they saw God before they returned to life.

That's exactly what a man who is the subject of this strange story says happened to him.

After a car crash in which he almost (and maybe really) died, he says, this happened: "Before I could come to a stop, I found my self standing before this brilliant and awesome light. There was no tunnel. I was standing there in a dark spot in front of this light. All I felt was pure Love. I could not move at all and could not hear or speak.

"There were three figures in front of this light. Two of the figures looked like they were talking to each other. The third one saw me and then approached. He had this glow around him. He had a beard and mustache. He was talking to me, but I couldn't hear him. All of a sudden a figure appeared within the light. All I could make out was a shadow because of how bright the light was. He lifted up his right hand and the only words I heard was, 'Now is not your time.'"

Let's unpack that a little.

Light has often been a synonym for -- or symbol of -- the divine. Indeed, that's been true ever since God said "Let there be light" in one of the Genesis creation stories. Jesus himself described himself as the "light of the world." So in these near-death-experience stories we should not be surprised to find experiences of light.

But did you notice broad hints of Christian Trinitarian theology in the man's story? Three figures showed up there -- suggesting, in the conventional Christian description of God -- Father, Son and Holy Spirit. And perhaps because nearly all depictions of Jesus show him with a beard and mustache, that's what appears to this man.

You and I have no way of knowing what this man really experienced, if anything. We have only his word for what happened. And, therefore, we cannot make any judgment -- and shouldn't -- about whether this really happened to him or about whether this is how God appears to people as they die (or darn near die).

If, in fact, we can and do buy into this story -- or any of countless other stories of faith -- it's simply evidence that we have made the conscious leap from scientifically proven phenomenon to convictions of the heart. We have made a leap of faith. And faith always requires such a leap -- or it is not faith. As the book of Hebrews in the New Testament says, faith "is the substance of things hoped for, the evidence of things not seen."

It's also interesting that something Jesus himself said seems to come into play in this man's story. After Doubting Thomas came to faith and called the risen Christ "My Lord and my God," Jesus replied, "Do you believe because you see me? Happy are those who don't see and yet believe." There's hardly a better definition of faith than that.

If something like what happened to this man happens to you, let me know. Better yet, keep a camera with you and bring back some photos. All of our 21st Century scientifically bent minds would be grateful for such evidence.

(The photograph here today of the heavens is one that I took a few years ago at the Crystal Bridges Museum of American Art in Bentonville, Ark.)

The author of this column makes a good point: "(J)ust because I’m aware of the destruction caused by racism, that doesn’t mean I’m automatically sensitive to other forms of racism." He writes as a Black man who once made antisemitic remarks without thinking much about it. It cost him, but he learned through the experience. So here's a good question all of us should ask ourselves: Are there injustices about which we still make jokes?

P.S.: When the dictatorial president of Turkey recently mandated that the Hagia Sophia, once a Christian Orthodox cathedral, be turned back into a mosque from a museum, it was the wrong and divisive decision for many reasons. My friend Markandey Katju, former justice on India's Supreme Court, writes about some of those reasons in this article. "President Erdogan," he writes, "is trying to set the clock back by trying to convert a secular country into an Islamic one."