When the idea of individual sin isn't enough

It's oversimplifying things to put it this way, but within Christianity there are, broadly, two sometimes-competing ideas about sinfulness.

So it becomes news when someone identified with the first -- in this case a Southern Baptist pastor -- makes the case that Christians worried mostly about individual sin and individual salvation need to broaden their scope and recognize systemic sin -- racism -- where it exists.

As this Religion News Service story reports, Rick Armstrong, the pastor of a start-up church in Arlington, Texas, told fellow Baptists that they “must understand that racism is much more than an individual sin. . .Southern Baptists must embrace the reality of structural, systemic and institutional areas of racism.”

In some ways it's surprising that it has taken this long for some evangelicals to move from a fairly rigid view of sin as individual to a broader view that entire social systems can be unjust. Surely the system of slavery, which the Southern Baptist denomination at the time supported, should have been seen as a systemic plague in hindsight once the Civil War ended -- and slavery with it.

In any case, it's refreshing to see Armstrong and others now making the case that an individual view of sin is inadequate to explain the many ways in which Blacks and others in the U.S. continue to be oppressed and held back from reaching their full human potential.

In what my denomination, the Presbyterian Church (USA), calls the "Confession of 1967," the focus is systemic, not individualistic. The confession, or statement of faith, deals with reconciliation between humans and God and among humans.

Notice that it doesn't say "his reconciling individual."

As I was writing this blog post, I ran across something from and about President Woodrow Wilson in the 2009 biography of him by John Milton Cooper Jr. that I'm reading. Cooper reports that in an October 1914 speech that Wilson gave to the Pittsburgh chapter of the YMCA, he "applauded faith like theirs, which expressed itself in good works and social reform but he also said that he did not like to think of Christianity 'as a means of saving individual souls.' He was being true to his Presbyterian upbringing, which stressed the workings of God in the world in large ways, not as solace to individuals for life's agonies."

Well, Wilson, I think, went too far in dismissing Christianity as a "means of saving individuals souls." I would say it is about individual salvation but it's also about much more than that. It's about living lives of gratitude in response to God's love of us. To miss that because we're so focused on individual salvation is to miss the point not just of Jesus' life, it seems to me, but also of his death and resurrection.

So how one understands theology can make a difference in how one sees the anti-racism work that many in the U.S. have begun to take more seriously since the murder of George Floyd by a Minneapolis police officer (to say nothing of other outrages).

The reality is that the U.S. currently has in place unjust systems in the areas of policing, incarceration, health care, education, the environment and more. And these systems cannot be fixed simply by individuals agreeing to treat people who don't look like them nicely.

Systemic problems require systemic solutions. We cannot, for instance, reverse the environmental degradation of the Earth simply by individuals using more efficient light bulbs. System approaches don't remove one's individual relationship with God, but they do serve as reminders that along with that a vertical relationship there must be a horizontal relationship with the rest of humankind, and that relationship inevitably involves various systems that can be -- and often are -- corrupted and in need of repair.

(By the way, The Atlantic just published this interesting story about Black pastors who have taken on the role of helping their white evangelical colleagues say the right things when it comes to racism. It's worth a read.)

WHY WE NEED TO STUDY HISTORY

If you're still confused about why Native Americans and others took offense at President Trump holding a Fourth of July celebration at Mount Rushmore, perhaps this backgrounder from RNS will help. The author of the piece notes this: "What we are also failing to see, though, is that there is nothing exceptional about what Trump did: It fits right in with the long history of racist abuse that arrived with European colonists." Indeed.

P.S.: This year's annual conference of the National Society of Newspaper Columnists got nixed by the virus, but I just learned my blog won an award. A YouTube roll-out of all the winners is here. 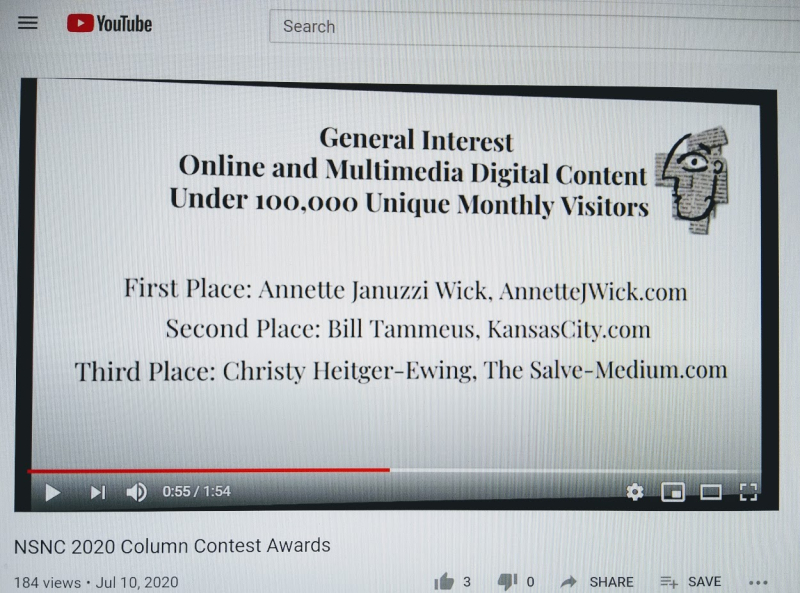