Home Archives Profile
Who, really, was King David of the Bible?
Something to celebrate in American history

No, he was Jesus of Nazareth, not Natchez

When the rallies, protests and other reactions to the George Floyd murder (well, that and similar outrages) began, I figured it was only a matter of time before someone would -- again -- raise the question of why so many American Christians think of Jesus as a white man. 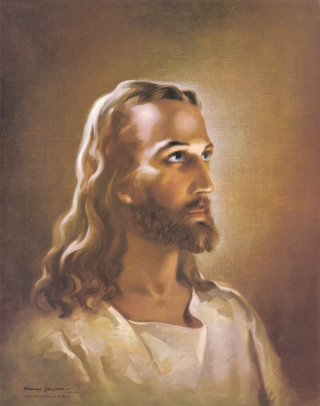 Well, it's happening. And I'm glad.

This Religion News Service story describes some of how the strange idea of Jesus' whiteness gained such currency in the U.S. And this story from The Week explores the matter from another angle. Beyond that, this editorial from The National Catholic Reporter explains why a white Jesus is a problem.

The RNS story describes how the "Head of Christ" painting by Warner Sallman (pictured here) "came to define what the central figure of Christianity looked like for generations of Christians in the United States — and beyond."

Indeed, that painting was ubiquitous in my childhood. In almost every church (and in many homes) you could find a copy or two of it hanging on some wall.

And if you look carefully, you can see that Sallman gave Jesus blue eyes. Yep, a First Century Middle Eastern Jew with blue eyes. He must have been quite an attraction.

"The backlash to Sallman’s work," RNS reported, "began during the civil rights movement, when his depiction of a Scandinavian savior was criticized for enshrining the image of a white Jesus for generations of Americans.

"That criticism has been renewed recently amid the current national reckoning over racism sparked by the death of George Floyd, a Black man killed in an encounter with police."

Indeed, as the story in The Week notes, "After the Confederate statues come down, activist Shaun King tweeted Monday, 'the statues of the white European they claim is Jesus should also come down.'

"'They are a form of white supremacy,' he said. 'Tear them down.' And tear down all the 'murals and stained-glass windows of white Jesus, and his European mother, and their white friends,' too, King added."

Well, as I said here on the blog the other day about statues of Confederates and slave owners, I'd prefer that we not tear them down but, rather, move them to some kind of museum-like context where people can learn from them about the evils of slavery and, in the case of white Jesus portraits, the issues of white supremacy. Let's use this as a time of learning and not waste it by destroying evidence.

And one of the things to learn is how Sallman's Evangelical Covenant Church has changed over the years. This piece describes those good changes.

Emotions are running high after the Floyd murder -- as  they should. But let's not make decisions about destruction that we'll later regret.

And while those who are Christian are figuring out how to react to all of this, it would be helpful to remember, as this piece from Ethics Daily notes, that the church's struggle with racism started way back at the beginning. As the author points out, "although the primitive church 'continued steadfastly in the apostles’ doctrine and in fellowship with one another,' they still confronted ethnic tensions within the newly formed community." And so the story continues today, though in different circumstances.

(The photo of the Sallman painting seen here today came from the RNS story to which I linked you. The caption read: "Painting by Warner Sallman, “Head of Christ,” © 1941 Warner Press Inc., Anderson, Indiana. Used with permission.")

Although there are traces of the "God of the gaps" approach in this interesting Forbes article about science, religion and philosophy, it does give us a pretty good sense of where we are in the changing relationships among those three disciplines. What's important to remember is what science can't answer -- ever -- and what religion shouldn't try to answer -- ever. Keep such things in mind and the world will make better sense.