My state, Missouri, seems to have a weird fascination with death. Over the Memorial Day holiday, for instance, all kinds of reckless people gathered at the Lake of the Ozarks to party in such a risky way in the midst of this deadly coronavirus pandemic that even Gov. Mike Parson felt called upon to chastise the partygoers.

(And in the wake of the George Floyd murder, lots of protesters seem to be putting themselves and others at risk by taking to the streets in large, close-together numbers.) 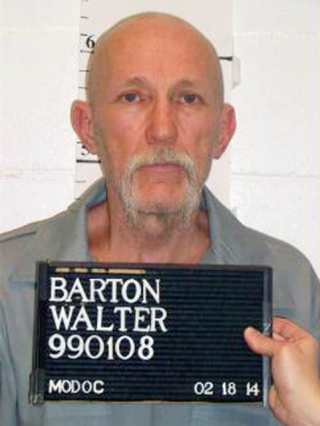 This is the same Mike Parson who just a couple of weeks earlier refused to intervene and stop the execution of Walter Barton (pictured here), a man whose murder conviction was so tainted that even several of the jurors who convicted him said they were wrong to do that. (The only good thing to say about Barton's execution is that it came after a long legal process and that he wasn't summarily executed the way Floyd was by a police officer in Minneapolis.)

Over the years I've written in several venues about why capital punishment is wrong and deeply immoral. This RNS column by Shane Claiborne, author of Executing Grace: How the Death Penalty Killed Jesus and Why It’s Killing Us, says many of the things I've said about the death penalty, but it speaks directly to Christians who support it.

"(T)he death penalty," he writes, "wouldn’t stand a chance in America if it were not for Christians. On Missouri Gov. Michael Parson’s website, the last line of his bio reads: 'Governor Parson has a passion for sports, agriculture, Christ, and people.'

"Eighty-five percent of executions happen in the Bible Belt, and nearly all the states that are actively executing have Christian governors, like Parson. It is a stark reminder that the death penalty has survived not in spite of Christians, but because of us.

"If those of us who follow Jesus were to heed his words, 'Blessed are the merciful, for they will be shown mercy,' we could end the death penalty overnight. But, as it is, on May 19, Parson not only killed a man who was likely innocent. He also killed a brother in Christ. Barton was Catholic."

The reasons to oppose capital punishment are myriad, and need not even include religious ones. For instance, there's the economic argument that it costs far more to operate a death penalty system than it does to have a system in which convicted people are given incarceration punishments, not death. It's one reason that people who identify as politically conservative have increasingly moved to try to abolish the death penalty in various states. That, and the fact that juries sometimes convict innocent people, like Darryl Burton, for instance, about whom I wrote here.

The Barton execution was shocking and appalling. It will forever be a black mark on Parson's record and on the state in which I have worked for 50-plus years. Many people have spent much of this pandemic risking their own lives to save other lives. How sad that while that has been happening Missouri purposefully has killed a man who probably wasn't guilty. I'm embarrassed for my state.

WHAT FLOYD AND BARTON HAD IN COMMON

Quick quiz: Do you know what the religious consensus is about Walter Barton and George Floyd? That they were both of inestimable value in the eyes of God. That would be true of both of them even if Floyd hadn't turned his life around in recent years and become a person of faith. In any discussion or debate about the death penalty or racism or protesting or rioting, that's the place to start. They were children of God.

P.S.: If you missed my latest Flatland column when it posted this past Sunday, you can find it here. It's about KC area clergy who, to their surprise, are finding at least a little joy in this dark pandemic time.