Home Archives Profile
Pope Francis can show us how to make systemic change
No, he was Jesus of Nazareth, not Natchez

Who, really, was King David of the Bible?

Last week here on the blog I discussed whether it ever will be possible to have a historically accurate biography of Jesus of Nazareth. (Spoiler alert: Probably not.) 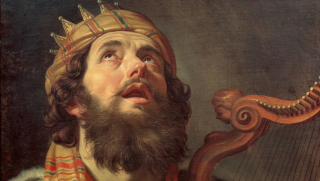 So what if we back up about 1,000 years and ask something like the same question of King David (seen here in his high school graduation photo), said to be the creator of the House of David, from which eventually Jesus came, according to Christian tradition?

Well, the answer seems even more difficult to find, even as archaeologists continue to dig all around modern Israel looking for clues and comparing what they're finding with the stories of David told in the Bible.

This long but fascinating New Yorker article gives us a look at that process.

"In the long war over how to reconcile the Bible with historical fact," writes Ruth Margarlit, a writer based in Tel Aviv, "the story of David stands at ground zero. There is no archaeological record of Abraham, or Isaac, or Jacob. There is no Noah’s Ark, nothing from Moses. Joshua did not bring down the walls of Jericho: they collapsed centuries earlier, perhaps in an earthquake. But, in 1993, an Israeli archaeologist working near the Syrian border found a fragment of basalt from the ninth century B.C., with an Aramaic inscription that mentioned the 'House of David' — the first known reference to one of the Bible’s foundational figures. So David is not just a central ancestor in the Old Testament. He may also be the only one that we can prove existed."

The battle among and between archaeologists that Margarlit describes is in some ways a battle of human egos. And yet sometimes the science is clear and old guesses must be set aside as almost certainly wrong. There's plenty of that in Margarlet's piece.

What all of this says to me is that people of faith need to understand how scripture was written, when and by whom. And for what purpose. The Hebrew Bible, the New Testament and the Qur'an, among other texts called sacred, were not written as history, at least as 21st Century Americans understand history. They were written for theological purposes. And although they may well contain actual, verifiable accounts of historical events, that isn't their primary purpose.

Margarlit quotes an eminent archaeologist, Israel Finkelstein, this way about the Bible: “For me, the literal reading isn’t only wrongheaded but it actually detracts from the Biblical authors. Only when you read them critically do you understand their genius.” Margarlit says Finkelstein "is especially disdainful of scholars who claim to have found archaeological proof of the Bible’s veracity."

None of this, of course, means that the Bible isn't in some way what Christians often call it -- the word of God. But that word is conveyed by the words of humans. If you need help understanding all of that, my own pastor, Paul Rock of Second Presbyterian Church, is doing a podcast and video series right now he calls "The Bible for Beginners." Paul explains in some detail what it means that the Bible is God's authoritative word to us but why we are fools to imagine it is historically inerrant. Reading it as inerrant turns out to be a quite robotic, low view of scripture. I hope you'll check out Paul's series.

Much blood has been shed over how scripture of various faith traditions should be read. That should end. But probably it will end only if people understand who wrote scripture and what tools are necessary to interpret it. Literalistic readings of it almost inevitably lead to trouble.

EVEN STATUES IN ENGLAND ARE VULNERABLE

As you no doubt know, England abolished slavery before the U.S. did. But English churches -- especially those affiliated with the Church of England -- contain lots of statues of people who are connected to that slave trade. The archbishop of Canterbury, however, says the process has begun to move some of the statues or to place them in a context where they can be better explained. Good. But this process -- both in the U.K. and in the U.S. -- should be done carefully and thoughtfully. Instead of destroying all Confederate statues or statues of such people as Andrew Jackson, I'd rather that they be put in a museum-like context where people can learn how white supremacy was an evil motivating factor that led to their positions of leadership. If the statues are destroyed without putting them in that kind of context, we eventually may forget the evil they did and repeat it.

P.S.: My latest Flatland column -- about how KC's seminaries have adapted to the pandemic -- now is online here.