Home Archives Profile
A chance for anti-LGBTQ+ Christians to repent
Who, really, was King David of the Bible?

Pope Francis can show us how to make systemic change

Since George Floyd's murder -- to say nothing of the nation's and world's response to the coronavirus pandemic -- there's been a lot of talk about the need for systemic change. 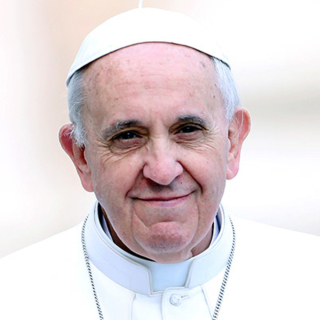 In fact, I recently dealt with that matter here on the blog.

There's debate, of course, about which systems are broken and in need of repair. And there's debate about how to fix them. That's as it should be.

But fixing systemic problems -- as opposed to changing the minds of individual bigots -- clearly must be on our social, religious, economic and political agenda. Otherwise we've wasted this crisis.

So where do we go to see some models of how others have attempted systemic change?

This RNS article says we can learn from the way Pope Francis (pictured here) has been trying to accomplish such changes in the Catholic Church. And, in fact, there is much we can learn from this pope. Early in his papacy this was apparent even to non-Catholics, which is one reason my pastor, Paul Rock, and I wrote our 2015 book Jesus, Pope Francis and a Protestant Walk into a Bar: Lessons for the Christian Church.

The RNS piece correctly notes that "for Francis, the root of the church’s problems was clericalism: the belief that religious people belong to a superior caste, insulated by favoritisms, which has helped promote an air of moral superiority among clergy.

“'Clericalism is our ugliest pervasion,' the pope told seminarians last year. 'The Lord wants you to be shepherds; shepherds of the people, not clerics of the state.'

"The mentality behind clericalism, according to Francis, has helped spread corruption within the Catholic Church. Victims of sexual abuse were not taken seriously, and predator priests were moved instead of removed in order to save face. The belief that only those who are ordained have authority has helped marginalize laypeople in the Catholic Church, especially women."

So he began to work on ways to change both the reality of the church's organizational structure and that structure's image among the faithful, perhaps starting with his personal decision not to live in the traditional papal palaces. That, the RNS piece says, "sent a message of simplicity and humility. The Argentine pope opted for simple clothing, avoiding the colorful flourishes of his predecessors and helping to promote a public image that portrays the church and its clergy as closer to the people."

So Francis was not doing this just because he personally didn't like fancy living. Rather, he was trying to change a clerical system that he viewed as the cause of much trouble in the church.

That's the kind of systemic thinking we need now as we re-imagine policing, education, health care, employment, our criminal justice system as well as access to public transportation, affordable housing and other systems that now benefit one group over another for racist reasons. Everywhere we see either white supremacy itself or its vestiges, we must act in fair and communal ways to reconstruct our systems without that.

(By the way, a black friend pointed out to me the other day that most of these systems aren't actually broken. Rather, they're working in exactly the racist way they were designed to work. So we need new non-racist systems.)

Pope Francis, of course, has his many critics. And even his strong supporters acknowledge that he's made errors along the way. But if we're looking for a current model of what systemic change looks like and how it can happen, the pontiff can serve well in that capacity.

WHAT'S ISLAM GOT TO DO WITH IT?

It turns out that there is Islamic history behind today's protests about racism in America, and Michael Wolfe, an author and documentary producer, describes it in this RNS article. "Islam," he writes, "has a deep backstory in this drama. The first New World revolt against slavery was led by West African Muslims in the Dominican Republic in 1522. The prolific 19th-century scholar Omar bin Said in the Carolinas and the pre-Abolitionist hero Prince Abdul Rahman Ibrahim in Natchez, Mississippi, were the forefathers of the Black Pride we see today." I was aware that many -- perhaps one-fifth -- of the slaves dragged here from Africa were Muslim, but I didn't know some of what Wolfe talks about in his article. Maybe you didn't, either. So give it a read.