Does the religious affiliation of voters mean much?

One of the big political trend stories in the last 40 years or so has been the way Christians -- particularly those who identify as white and evangelical -- have become pretty reliable Republican voters. 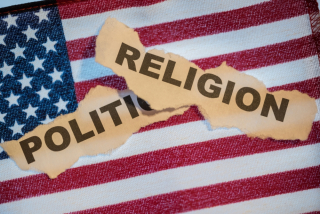 Many reasons for this have been proposed by people who study such things. They include, of course, the desire to have a president who will appoint justices to the U.S. Supreme Court who might vote to overturn the 1973 Roe vs Wade decision that legalized abortion across the country.

And in 2016, when some 81 percent of white Christian evangelical voters cast ballots for Donald Trump for president, another (obvious by now) reason was that they were willing to support someone whose life has been a repudiation of evangelical values so they could have -- and influence -- power. A Faustian bargain to be sure.

The Pew Research Center, which pays attention to the religious makeup of voters, just reported that as the share of registered voters who are religiously unaffiliated (the so-called "nones") has increased, the share who identify as Christian has declined. Today, Christians make up about half of Democratic voters (52 percent); in 2008, about three-quarters of Democrats (73 percent) were Christians. Over that same period, religious “nones” have doubled as a share of Democratic voters, from 18 percent to 38 percent. The changes among Republicans have been more modest: Christians constitute 79 percent of Republican voters, down from 87 percent in 2008, Pew reports.

The report to which I linked you also says that "while religiously unaffiliated voters do not make up as large a share of Republicans as Democrats, they do make up a growing share of GOP voters. Today 15 percent of Republican voters do not identify with a religion, up from 9 percent in 2008."

Well, all this may be fascinating for pollsters and numbers crunchers, but the broader question is whether people really make voting decisions based on their religious beliefs. No doubt some -- maybe many -- do, but that's a much harder question to answer than simply identifying what percentage of Democrats, say, are Christian. The other thing that such numbers don't take much into account is people who split their ticket -- voting, say, for a Democrat for president but a Republican for governor or senator. And, yes, there still are such people, though surely their number had dwindled in recent years as more and more people live in one-party political silos.

The point is that life is complicated and that we shouldn't put too much emphasis on the religious affiliation of voters, except in such cases when there's an overwhelming reason to do so, such as trying to figure out why in the world 81 percent of white evangelicals voted for Trump.

I bet that 81 number will decline for Trump in the 2020 election, especially if such evangelicals pay attention to some of their  leaders, whose essays are collected in a new book called The Spiritual Danger of Donald Trump, edited by Ronald J. Sider. The 30 essayists there plead with other evangelicals not to make the same Trump mistake they made in 2016. It's an interesting read.

There's good news (for a change) in the world of ancient religious manuscripts. This Guardian story reports that "more than 2,500 rare manuscripts and books from the Islamic world covering a period of more than a thousand years are to be made freely available online." It's important to know the history of how sacred writ was created and preserved and what role it played in the promulgation of the faith. These old manuscripts are too fragile to be handled by the public, but now they'll be available to all. Thanks to everyone who is making this happen.