Home Archives Profile Subscribe
An atheist's view of why science trumps religion
Are these the worst religious ideas ever?

What do you know about Harry Truman's religion?

Because it's Harry Truman's birthday today (1884-1972), I thought we'd take a little break from thinking about the coronavirus pandemic and talk a bit about HST and religion. 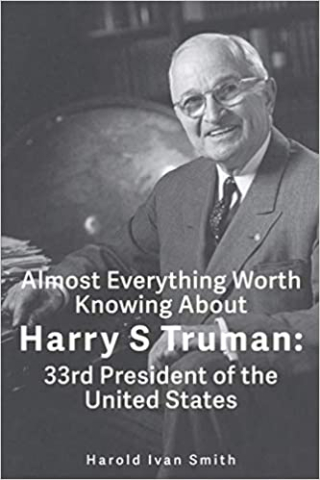 To do that, I'm borrowing from a new book by a fellow I know, Harold Ivan Smith. The book is called Almost Everything Worth Knowing About Harry S Truman. And one cool thing about it is that it's done in the form of a long multiple-choice quiz.

Smith has divided his quiz into several dozen chapters, and today I'm picking out a few of the questions from the religion section. But wait. No doubt you wonder how I did on the whole quiz. I didn't keep score as I read the book, but I'm guessing I got about 60 percent of the answers right.

But I had an advantage. At one point in my career at The Kansas City Star, I wrote a lot about Truman. For instance, when Bess Truman died in October 1982, almost 10 years after Harry's death, almost 1,300 letters from Harry to Bess were found in the Truman home in Independence and archived at the Truman Library. They started when they were courting and ran through his White House years. I read them all and wrote quite a bit about what they revealed about our 33rd president.

So in reading Smith's book, some of what I learned then and remembered helped me get some of the answers right. But some of the questions in the book focus on quite trivial things in HST's life, which makes me guess that even Truman wouldn't score 100 percent on the quiz.

All right. Enough. A few of Smith's questions:

By age 12, what had HST reportedly done?

A. Memorized the Declaration of Independence.

B. Read the Bible through twice, "cover to cover"

What Part of the Bible did HST find most meaningful?

How did HST describe his religious faith?

A. "An old-fashioned Bible believin' Baptist"

D. "A Baptist who thinks 'there's more in acting than in talking'"

Well, that's a taste of what's in the religion section of this new book. It's a fun read, especially for people in the Kansas City area, Truman's home. Well, he wasn't born here, however. Where was he born? (Answer below with the quiz answers.)

Oh, and here's a Truman-related question from me: Where are Harry's parents buried?

A: Forest Hill Cemetery in Kansas City, Mo., where I often walk in this pandemic time. I took these photos of their graves just a week or two ago.

A CHANGING DAY OF PRAYER

Yesterday was the National Day of Prayer. Did you participate? In past years, the day has been dominated by Christians in the U.S., particularly those who identify as evangelical. But as this RNS story reports, yesterday's events were far more interfaith in nature. Which, of course, reflects the changing religious landscape in the U.S.