Home Archives Profile
Was this a case of museum-quality idolatry?
A sad story about 'Jane Roe' of Roe vs Wade

The need for prophetic voices now

The coronavirus did not cause all the problems in society that we've been experiencing during the time since this pandemic exploded on us, but it certainly did reveal them in case someone hadn't noticed them before. 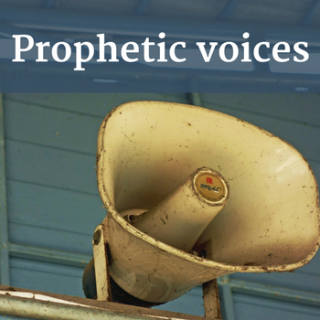 So as faith communities begin to find their way back to meeting again in person, they also now know that they will have a responsibility to use their prophetic voices to describe those problems and propose solutions. It's what people of all the great world religions are called to do, now and always. What problems?

This is not an exhaustive list, but it's a place to start: Racist systems, inadequate education, health care and health insurance equity issues, economic disparities, our current culture of contempt, including contempt for expertise, as described in this book by Tom Nichols: The Death of Expertise: The Campaign Against Established Knowledge and Why It Matters.

As Nichols writes, "Americans have reached a point where ignorance, especially of anything related to public policy, is an actual virtue. To reject the advice of experts is to assert autonomy, a way for Americans to insulate their increasingly fragile egos from ever being told they're wrong about anything."

We have watched that sad reality play out day after day when people like Anthony Fauci and Deborah Birx, experts on the spread of infectious diseases, had to listen to -- and try to counter -- the dangerous nonsense President Trump has been putting out about this pandemic.

His kind of willful ignorance leads to crazy conspiracy theories and the many people who buy in to them and who thus are filled with certitude about completely made-up stories. The "birther" story suggesting Barack Obama wasn't born in the U.S. is a prime example of this gibberish. For details, see this distressing article about "QAnon" in the current issue of The Atlantic. You don't know about QAnon? Oh, my. You need to.  Today.

The QAnon issue is also mentioned in this RNS column about the widespread prevalence of conspiracy theories, particularly among young Americans. And this article from The Conversation describes how some in the QAnon movement are using its bizarre thinking to interpret the Bible.

So somehow people of faith must help lead society to understand the difference between opinion and fact because lives depend on knowing that difference, as the pandemic has proven again.

That means that religious people must be extra careful not to blithely assert that they know what God has to do with the spread of viruses. Do they do that now? Oh, yes, many do.

This recent Associated Press story , for instance, describes how many Americans think the virus is a sign from God that things need to change. The story reports that a new poll by the University of Chicago Divinity School and the Associated Press-NORC Center for Public Affairs Research shows that "31 percent of Americans who believe in God feel strongly that the virus is a sign of God telling humanity to change, with the same number feeling that somewhat. Evangelical Protestants are more likely than others to believe that strongly, at 43 percent, compared with 28 percent of Catholics and mainline Protestants."

It's clear that things need to change. But does God arrange to kill tens of thousands of people to get that message across? If so, that's not a God who would attract my allegiance. Beyond that, there's no doubt a wide variety of ideas among the people who responded to this survey about what God has in mind in the way of change. In any case, I'm not sure we need to rely on God to send us a new list of needed changes when, in fact, many are obvious and can be drawn by using the moral values that all the world's great religions teach.

So, for instance, the pandemic has shown all of us that despite the great medical workers we have in the U.S., the system is broken when millions lose their jobs and thus lose their medical insurance. (Why do so many people get their health insurance through their employer but not their auto or homeowners insurance? Just curious.)

Caring for all is going to require a new health insurance system -- one that doesn't slam shut in crises and one that isn't as expensive and arbitrary as the one we have now. We simply cannot survive another pandemic (yes, another will come) with our current health care and insurance systems. Nor should we try to survive another pandemic by relying on underpaid but over-exposed first responders, including ambulance drivers, fire fighters and emergency medical technicians. They must be compensated more fairly and protected more, too.

The pandemic also has revealed again the reality that people in poverty get slammed harder than others and, in turn, require expensive solutions just to keep them from starving or losing their homes. Underneath that larger problem we find such problems as a lack of internet access in the homes of many poor children (such as the public high school student I've been mentoring), meaning that they fall further behind when education goes completely online. There are many ideas for how to fix this, but so far we haven't settled on one (or a combination) and really tried to make it work. That's what we must do now.

As the pandemic continued to keep people locked down and major parts of the economy shut down, we also began to see more clearly our culture of contempt in which civil discourse has been replaced by mindless shouting and sometimes by violence. Faith communities should be modeling how to live together civilly even when we have sharp disagreements about things. In other words, they should be doing what our president clearly is not doing -- and even what some corners of faith communities are not doing. Such an effort certainly would beat internet trolls and the spreading of misinformation through mean memes.

Here, by the way, is how one Christian pastor is thinking about what the church will and should look like once this pandemic is in our rear view mirror. It's worth your time, no matter your faith tradition.

Every crisis is an opportunity for constructive change. Let's not waste this one.

AN AWARD FOR MAKING THE SCIENCE-RELIGION CONNECTION

This year's Templeton Prize has been awarded to the remarkable Francis Collins, director of the National Institutes of Health. The prize honors people whose work in science also seeks to help illuminate some of the deep questions that religion seeks to answer. I have admired Collins' work at least since the time when he led the Human Genome Project that mapped the DNA letters that, as the RNS story to which I've linked you reports, "compose the human genetic instruction book." Collins once considered himself an atheist, though in his 20s he embraced Christianity. I wish we could clone Collins. To read the Templeton Foundation's release about this year's prize, click here.