Was this a case of museum-quality idolatry?

When does our fascination with religious history slip over into idolatry of historical objects? That's one of the many questions that this Atlantic article about fraud in the world of religious artifacts raises. 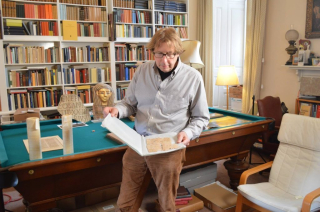 Before we get into some of the details of this story, including the mid-April arrest of an Oxford professor who has been accused of stealing ancient biblical texts, here's my thought about idolatry: All sin, in the end, comes down to idolatry. That is, sin in one way or another means putting something else ahead of God. Which is one reason the First Commandment (don't have any other gods but God) is first. Get that one right and the rest of them fall into place.

The fascinating -- and long -- Atlantic piece describes the various ways the leaders of the new Museum of the Bible in Washington, D.C., which I wrote about here a few years ago, has been sucked into the debauched part of the world of ancient artifacts.

Steve Green, who with his family started the museum, also owns Hobby Lobby. Before the museum opened, he had millions of dollars to spend on items to display there, including rare fragments of ancient sacred manuscripts. Green's interest, of course, was mostly in the Bible, both the books in the Hebrew scriptures and those in the New Testament.

As we know from the story of how ancient manuscripts, including the Dead Sea Scrolls, which were found in 1947 and eventually made it into the public domain, the secretive world of people who deal in such items can be both dark and, at times, criminal.

The Atlantic piece focuses on a once-highly-respected Oxford papyrologist named Dirk Obbink (pictured above), who continues to maintain that he's done nothing wrong.

But the desire for sought-after objects -- whether it's original-language biblical manuscripts or gold or diamonds -- creates a seductive market that can cause people to lose their moral compass, if any, and try to acquire the kind of huge wealth that's possible when such items are sold.

In this case, the question of who, if anyone, committed idolatry can be asked not only of Obbink but also of the Green family. I cannot, of course, get inside the heads or hearts of any of them, but the idolatry question clearly is worth asking in this case.

Well, I'll raise just that question today to give you time to read the Atlantic piece -- which demonstrates terrific reporting by Ariel Sabar.

WHAT'S UP WITH THE METHODISTS?

Had the coronavirus pandemic not interfered, the United Methodist Church by now almost certainly would have experienced an official and expected schism. But the big meeting at which this was to have happened got postponed until August or September or maybe later. Still, here is an RNS update on where things stand now that things are sort of frozen in place (like the rest of us).