Home Archives Profile
Is the U.S. about to see a religious awakening?
How do people of faith sometimes get duped?

What will the unsealed Vatican archives tell us?

Eventually the truth about almost any subject or happening will be revealed. 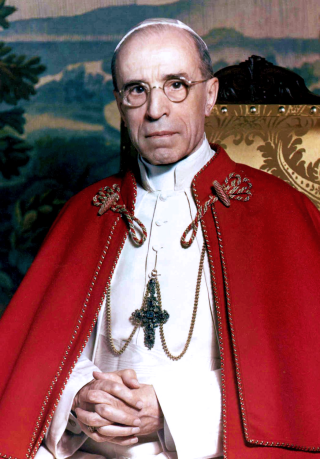 Seventy-five years after the end of World War II, it appears that we finally may learn, in some detail, the truth about what Pope Pius XII did or did not do to help the Jewish people, who were being murdered in mass by Hitler's Nazi German government.

As this Guardian story reports, "New light will be shed on one of the most controversial periods of Vatican history on Monday (two days ago) when the archives on Pope Pius XII (pictured here) – accused by critics of being a Nazi sympathizer – are unsealed.

"A year after Pope Francis announced the move, saying 'the church isn’t afraid of history,' the documents from Pius XII’s papacy, which began in 1939 on the brink of the second world war and ended in 1958, will be opened, initially to a small number of scholars."

There has been much speculation -- some of it reasonable, some of it wild -- about what Pius XII did at the time. He's been praised for helping Jews and denounced as "Hitler's pope."

Pulitzer-Prize-winning Author David Kertzer, whose fascinating book, The Pope and Mussolini, about Pius XI, not XII, I read recently, is quoted in the Guardian piece on what historians currently know about Pius XII and whether he did anything to save Jews:

“On the big question, it’s clear: Pius XII never publicly criticized the Nazis for the mass murder they were committing of the Jews of Europe – and he knew from the very beginning that mass murder was taking place. Various clerics and others were pressing him to speak out, and he declined to do so.

“Although there is a lot of testimony showing that the church did protect Jews in Rome, when more than 1,000 were rounded up on 16 October 1943 and held for two days adjacent to the Vatican [before deportation to the death camps], Pius decided not to publicly protest or even privately send a plea to Hitler not to send them to their deaths in Auschwitz. Hopefully, what we’ll find from these archives is why he did what he did, and what discussions were going on behind the walls of the Vatican.”

Kertzer has written this enlightening piece for The Atlantic about what he expects will be found in the newly released Vatican archives. It's well worth a read. As Kertzer writes:

"The issues the newly opened archives will shed light on are not only of historical interest. The traumas of the Second World War and of the Holocaust remain very much alive. Holocaust denial might be dismissed as the delirium of a crackpot fringe, but denial of responsibility for the war and for the Holocaust remains widespread in Europe and in the Christian churches."

It's going to take some time -- maybe years -- for scholars to dig through these newly opened archives and make sense of them. But at some point we should have a much clearer picture of what Pius XII and, by extension, the Catholic Church did in response the the Holocaust. The church and the wider world need to know so that unwarranted speculation is avoided and lessons for the future can be learned in order to avoid similar mistakes, errors of judgment and moral collapse in the future. And this whole matter of a Christian response to the Holocaust is not just about the Catholic Church but, rather, the church universal, various branches of which failed to act at the time and have had to issue statements of regret and apology.

DOES LENT NEED TO BE REMODELED?

In traditional Christianity, this season of Lent has been a time of introspection, repentance, even brooding. But now there's a move afoot to use the time in ways that focus less on darkness and more on light, as this Religion News Service story reports. That could work, though the necessary caution is this: If you rush to get to the light of Easter it will mean much less because you missed what the darkness of Good Friday has to teach followers of Jesus.