Home Archives Profile
How should religious people respond to the virus?
A few coronavirus questions for you

What would be the politics of Christ? 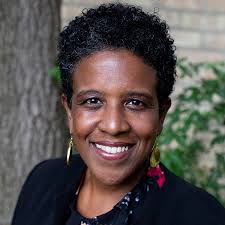 After all, much of what Jesus said and did was a response to the political realities facing the people of Israel 2,000 years ago when they were under the brutal thumb of the Roman Empire. And one of the responses of the followers of Jesus was specifically political. It was to adopt the three-word confession "Jesus is Lord." Which meant that Caesar wasn't Lord.

Two visiting scholars talked about all of that last weekend at Village Presbyterian Church in Prairie Village, Kan. I was able to hear only the Friday evening speaker, the Rev. Dr. Margaret Aymer, (pictured here) a professor of New Testament studies at Austin Presbyterian Theological Seminary in Texas. So I missed what the Rev. Dr. Carolyn Helsel, assistant professor of homiletics at Austin, had to add to the subject on Saturday.

But the event was a reminder of the way religion and politics inevitably have things to say to one another. And it was a reminder to try to understand the original context in which sacred scripture was written. If we miss that we miss a lot.

Much of the time the words of Jesus were a critique of the unjust, compassionless Roman rule under which the people of Israel chafed. As Aymer noted (quoting New Testament scholar Warren Carter, who used to teach at St. Paul School of Theology in Kansas City), only about two percent of the population in the Holy Land at the time could have been considered reasonably well off and part of the elite. The other 98 percent often had no idea where their next meal was coming from and had to work extraordinarily hard just to survive.

So when Jesus urged concern for the poor, sick and needy, his words were a criticism of the economic and social systems in place under Roman rule. That's politics. When he healed people it was a critique of the health care system. That's politics.

And in the story of Jesus being tempted by the devil in the wilderness, Aymer said, Satan's offer to give Jesus control of all the kingdoms of the world was, in effect, a claim that Satan actually controlled those kingdoms and that they were his to give. If that's not a political statement, it's hard to imagine what might be.

Much the same could -- and should -- be said of the people today who identify as Christian evangelicals and who have become elite insiders in support of the Trump administration. In fact, as I've said before several times here and elsewhere, those religious elites have, in effect, abandoned their religious and moral beliefs so that they can be part of Trump's elite. It's sad and it produces revulsion not just of evangelical Christianity but of religion generally.

None of this is to say that today's sermons should be partisan and naked campaign speeches for this or that candidate, of cause. Rather, it is to say that it's hard to imagine an effective sermon that isn't in some way political. And if it isn't, why preach it?

The documents needed for the official now-inevitable schism of the United Methodist Church are moving through channels in advance of the denomination's May General Conference gathering in Minneapolis. This split, rooted in how scripture is read pertaining to LGBTQ+ issues, is one more result of some people reading the Bible literally as opposed to reading it seriously. Sigh.

P.S.: A few days ago here on the blog I mentioned that Rolls-Royce was offering owners of its car a chance for a private Mass with Pope Francis for about $155,000. Just FYI, in case you were tempted, that offer has been canceled. (If you were tempted, shame on you. But would you let me ride in your Rolls?)

ANOTHER P.S.: If you are part of a congregation that will be gathering this weekend, here's a link from the Centers for Disease Control and Prevention for congregational leaders to help them know what, if anything, to do about the coronavirus issue.