Home Archives Profile Subscribe
Did the Lord speak thus about tattoos?
Is the U.S. about to see a religious awakening?

Will Americans elect a Jewish president?

Voters in the U.S. have a chance to elect their first Jewish president this November -- either Sen. Bernie Sanders (left) or business tycoon Michael Bloomberg (right). 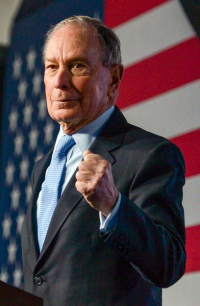 Might this be a sign that we are a more pluralistic, more accepting, less prejudice nation than we've ever been? Well, you and I might hope so, but I think that's a difficult case to make, especially under President Trump.

This Religion News Service story by Yonat Shimron quotes Jonathan Sarna, a professor of American Jewish history at Brandeis University, on this subject this way: “Having two candidates who are Jewish is especially significant.  We didn’t really have Jews in the Cabinet or on the Supreme Court until the 20th century. Even in the 20th century, you find that America was not ready for imagining a Jew in high office; several Jews declined Cabinet appointments in the first half of the 20th century, fearing it would lead to prejudice.”

One reason for this antisemitism, of course, is that it's related to the long, sorrowful history of anti-Judaism in Christianity, which I recount in this essay. There was a time 15 or 20 years ago when American Jewish leaders could say that most American Jews had little or no personal experience with antisemitism. But most of them aren't saying that any more, given such horrific attacks as the 2018 murders at a Pittsburgh synagogue and the murders of three people at Jewish institutions in suburban Kansas City in 2014.

So we don't yet know how the American electorate will respond to Jewish candidates in this tenser time.

Tablet Magazine, an interesting publication covering Jewish affairs, has done this story that focuses on Sanders and Bloomberg, raising the question of whether and how Bloomberg can stop Sanders from getting the nomination: "Specifically, Bloomberg is intent on splitting the race between Bernie, himself, and another 'centrist' (Pete Buttigieg or Amy Klobuchar). Bloomberg’s electoral strategy is premised on one goal and one goal alone: to prevent Bernie’s movement from winning a majority of the delegates to the Democratic National Convention."

The story mentions something that I either had forgotten or didn't know about this process: "Due to Bernie supporters’ post-2016 demands, the party’s new nomination rules stipulate that the superdelegates can enter the fray only on the second ballot — meaning in the event that a candidate cannot amass a full first-ballot majority. The Bloomberg campaign and the more than $350 million it has already spent — and the hundreds of millions more it intends to spend between now and July — therefore exist for one purpose and one purpose only: #NeverBernie."

I would like to believe that in this religiously pluralistic society Americans are willing to judge candidates by their proposed policies and ideas and not by whether they are followers of this or that religious tradition. I think we're certainly closer to that ideal than we were 100 years ago, say, but I don't think we're all quite there yet. Just as John F. Kennedy had to break through the Catholic barrier to the presidency, someone eventually will have to break through the Jewish barrier. I'm just not convinced yet that either Sanders or Bloomberg is the one to do it -- especially because so far my current favorite Democratic presidential candidate is Sen. Amy Klobuchar (D-Minn.), a member of the Mainline Protestant denomination known as the United Church of Christ.

Houses of worship in the U.S. used to be some of the most racially segregated spaces in the country. Is that still true? Religion News Service, in partnership with Sacred Writes, a project that helps scholars share their research with a broader audience, is examining that question. This article is one of a series RNS is doing. It reports that "More than a half century after the Rev. Martin Luther King Jr. challenged the Christian church to 'remove the yoke of segregation from its own body,' an estimated one-sixth of U.S. congregations have succeeded in becoming at least partly multiracial — but not without struggles." I see some of those changes in congregations with which I'm familiar, including my own, but for sure progress is slow.

P.S.: If you missed my latest Flatland column when it posted this past Sunday, you can find it here. It's about a great Judaica collection at a Kansas City area synagogue.