Did the Lord speak thus about tattoos?

If you read the Bible in a literalistic way -- which is to say in a way that relieves you of understanding the original context and what the Hebrew and Greek (and Aramaic) words might have meant -- you could conclude that the Bible forbids tattoos. 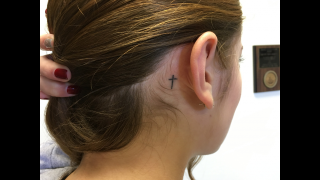 After all, Leviticus 19:28, in the Common English Bible translation, says this: "Do not cut your bodies for the dead or put marks on yourselves; I am the Lord."

Indeed, quite a few people over the years have interpreted that verse to mean that 22-year-olds in 2020 are forbidden from getting a tattoo of the Kansas City Chiefs' logo on their arm.

But, as this article concludes, ". . .the Bible does not say anything clear and direct about tattoos."

As a matter of fact, there's a growing trend for people of faith to get tattoos, and researchers at Baylor University and Texas Tech University have been studying the phenomenon.

The Baylor press release to which I've just linked you reports this:

The study, published in the journal Visual Studies, analyzed 752 photos of tattoos taken at a Christian university in the United States and found that nearly 20% of those were overtly religious in content.

“The embrace of tattoos in the United States reflects a generational shift toward greater individualism and self-expression,” said lead author Kevin D. Dougherty, Ph.D., associate professor of sociology at Baylor University. “Americans born since the 1970s have increasingly embraced tattoos as an acceptable means to communicate identity and belonging, whereas previous generations of Americans largely did not. Today, men and women in the United States are equally likely to have tattoos.”

One of the interesting results that researchers found is that quite often the tattoos on religious people are not meant to be seen by others -- they are not, in other words, signs designed to spread a religious message. Rather, they are placed so that the only person likely to see them is the person on whom they are inked. Thus, they serve as a reminder of sorts to the faithful to be faithful.

The researchers analyzed 752 photos of tattoos and found that "overt religious content appeared in 145 photos (19% of total sample)" and that "more men in the photos (23%) had religious tattoos than women (17%)."

I have friends and family members with tattoos, though so far I haven't joined that party and don't expect to. But I find it intriguing that more and more people seem to be using tattoos as a reminder of religious values, no matter what the writer of Leviticus thought about them. If you're reading this via Facebook and have a faith-based tattoo on you, would you share a photo of it?

(The photo here today is from the Baylor press release and was taken by the lead researcher, Kevin D. Dougherty.)

We are living in a time when interfaith activity seems to be growing and when people seem more willing to cross religious lines. As this article from the Jewish newspaper The Forward notes, this is resulting in new words to describe various religious combinations. Among them: Jewish&, Just Jewish, JewBu (Jewish-Buddhist), JewMu (Jewish-Muslim), Jew-theran (Jewish Lutheran), CathJew (Catholic-Jewish), Jewnitarian or Jewniversalists (Jewish Unitarians), Intercultural, Mixed heritage, Intermarried. For some reason the list doesn't include what my wife sometimes calls herself, an Episcoterian, a combination that also could be rendered Presbypalian. Are you some other kind of mix?

P.S.: My latest Flatland column -- about a magnificent Judaica collection at a Kansas City area synagogue -- now is online here.