From the time the results of the 2016 presidential election showed that 81 percent of white evangelicals voted for Donald Trump -- despite the reality that his life is an almost-complete rejection of the values they say they hold dear -- lots of people, including me, have been trying to figure out why. 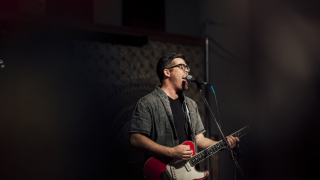 Here and there we've heard some voices finally calling these evangelicals to task for the abandonment of their faith. One example was this recent editorial in the evangelical journal Christianity Today.

But perhaps a more powerful voice can be heard from a musician, Daniel Deitrich (pictured here), who has written "A Hymn for the 81%," described in this Religion News Service article, which includes an audio clip of him singing it.

Whew. It is a powerful example of what religion calls a prophetic voice, which is to say a voice that calls out what's gone wrong and urges attention to the right path.

I hope you'll give it a listen, remembering that he's not telling people they should have voted for Clinton and not offering a damning critique of Trump's various political policies. Rather, Deitrich is asking the people who raised him as a Christian why they no longer seem to believe what they taught him.

HOW TO APPEAL TO EVANGELICALS

Along the same lines today, here's an AP story about whether and how Democrats running for president now can appeal for the votes of those who identify as Christian evangelicals. I suppose anything below 81 percent for Trump in this year's election (assuming some bolt of lightning doesn't result in a conviction in the impeachment trial) will be considered a victory.