Should religions have the final word on time of death?

Here's a development in religion that sort of slipped by me in late October, but it's one I think is worth backing up to because of the end-of-life issues it raises. 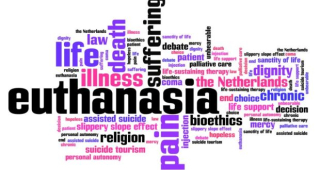 As this Catholic News Service story reports it, "Representatives from the Catholic and Orthodox churches and the Muslim and Jewish faiths signed a joint declaration at the Vatican reaffirming each religion's clear opposition to euthanasia and physician-assisted suicide.

"They also encouraged promoting palliative care so that dying patients could receive the best, most comprehensive physical, emotional, social, religious and spiritual care and appropriate support for their families, according to the joint statement."

To read the declaration in its original, click here.

Second, the voice of institutional religion needs to be heard on matters of life and death.

Third, this joint statement, for all its good points, strikes me as failing to reflect the nuances of end-of-life decisions, of real-world dilemmas and of the freedom all people should have to express their desires about end-of-life matters.

My third point reflects my reaction to this part of the joint declaration:

To forbid some act "without exceptions" is so sweeping as to suggest that there could be no possible circumstance in which someone in deep pain who clearly is within days or even hours of dying should not have the freedom to say that he or she sees no point in 24 more hours of needless suffering. It is to remove agency from the dying person even while forcing that person to continue in useless pain. That seems not just unnecessary but immoral if the person dying is mentally lucid enough to decide whether he or she wants that pain to continue.

I am not arguing for what is dismissed as "situational ethics," meaning sort of making up moral rules as you go along. Rather, I'm arguing that life is far too complicated for one rule about a difficult decision to apply happily to absolutely everyone.

The rules about physician-assisted suicide, or assistance in dying, as it's sometimes known, should be strict and restrictive. To allow someone to end a life is a huge responsibility and should never be handled in a casual, cavalier manner.

But rules that apply "without exceptions" are simply too broad to reflect all the possible realities of life. In the end, it should be the dying person who takes responsibility for any decision about whether to continue potentially curative treatments or even simple efforts at pain-relief at the end of life.

Representatives of the Abrahamic religions now have spoken on the matter and anyone who identifies as being part of one of those three religions should pay attention. But any insistence that this joint declaration ends the discussion would be unworthy of those faith traditions.

Leith Anderson, the retiring president of the National Association of Evangelicals, says he wants "the standard to be what the Bible teaches, not what the polls report.” The unmerited assumption behind his expressed desire is that everyone agrees on what the Bible teaches. Christianity and Judaism are divided today largely because of disagreements about that very thing.