Home Archives Profile Subscribe
Why the date-setters for the world's end are always wrong
What makes religion so darn difficult?

Longing for peace, we may underestimate war's true cost

In the Vietnam War era, it became a repugnant cliche to refer to unintended civilian deaths as "collateral damage." The term dehumanized what happened so we didn't have to think about women and children, mostly, losing their lives to the appalling violence war causes. 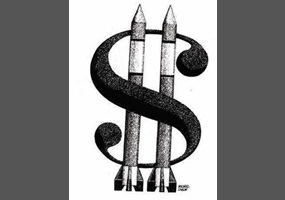 In this holiday season, when visions of sugar plums and world peace dance in our heads, perhaps it's time to acknowledge that the wars we fight still produce something like collateral damage.

A new study by a Vanderbilt University economist finds that "the post-9/11 wars may have resulted in more than twice as many indirect deaths back home as were lost in battle," as this Vandy press release reports. "These indirect deaths are due to the diversion of war costs from the U.S. economy and the subsequent impact on the nation’s health."

You can find the full report here. It appears in Peace Economics, Peace Science and Public Policy.

The primary message from this is that when we spend money on war, we have less to spend on education, health care, job training and other programs that, in the end, save and extend life.

Using a carefully calculated formula that determines what can be thought of as indirect deaths because of war, Viscusi found that while the wars caused the loss of 10,000-plus American lives, the indirect number of deaths exceeded 21,000.

If we truly value life, we will dedicate ourselves to avoiding wars, even while acknowledging that some wars are simply unavoidable and even necessary. But we must be clear about casualty and death numbers. They add up to a lot more than simply deaths on the battlefield, even if the formula Viscusi has used doesn't get it exactly right.

All of this is good to remember as much of the world celebrates the birth of someone called the Prince of Peace.

WHO HAS TAKEN THEIR PLACE, IF ANYONE?

Religion News Service has put together this list of 10 "religious influencers" who died between the start of the year 2000 and now. Quite a list. Anyone you think should be on it who's not?

P.S.: My latest Flatland column -- about Jean Zeldin retiring from the Midwest Center for Holocaust Education -- now is online here.