Home Archives Profile Subscribe
Keeping a religious freedom commission bipartisan
Should religions have the final word on time of death?

The first time I was in the Church of the Nativity in Bethlehem, which tradition says was the birthplace of Jesus, I was not quite 13 years old. But even then I was surprised that somehow experts (or someone) knew that one particular spot in the grotto of the church was exactly the spot on which Jesus breathed his first human breath. 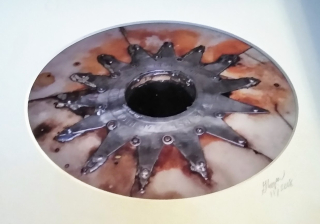 When I returned to that spot in 2012, I took a photo at the site, still a little (or a lot) skeptical that anyone could identify the exact place of birth. The photo you see here today is not the one I took but, rather, one taken by a friend of my youngest sister. I use it because it's framed in a way that makes it seem like a revered icon of some sort.

Which relates to the point I want to make today in response to the news that, as this story reports, a small piece of the manger in which the baby Jesus is said to have slept in Bethlehem has been sent by the Vatican back to the Holy Land.

Well, as the story notes, "Legend says that Christians guarded the Holy Manger, which was sent to Rome for safekeeping in the seventh century, following the Muslim conquest of the Holy Land. Since then, it has been the property of the Vatican."

Why do we care whether Jesus was born exactly where the stylized star pictured here today now lies or whether he was born 10 feet or 10 miles away? Indeed, some scholars believe Jesus wasn't born in Bethlehem at all but in his hometown of Nazareth.

Well, there's something to be said for verification of historic events. But isn't the point of the religion that grew up around this child in a manger, wherever it was, more about the idea of love and compassion, mercy and justice? Those are values that surely don't depend on the veracity of a story about being born in a barn or cave or on the ability in the year 2019 to know exactly where that barn or cave was. Nor do they depend on whether the little piece of wood going back to Bethlehem is really part of something in which the Christ child lay.

If we worship such furniture or such geography, we'll miss the whole point.

HE SHOULD HAVE SHOPPED ONLINE

In a recent homily, Pope Francis called consumerism “a virus that attacks the faith at the roots.” Sounds like someone had a bad Black Friday shopping experience.