Can writing really be a ministry?

A couple of days ago Sister Helen Prejean (pictured here), the author of Dead Man Walking and River of Fire (which I wrote about here in late August), spoke to students and a few guests at Notre Dame de Sion High School in Kansas City. 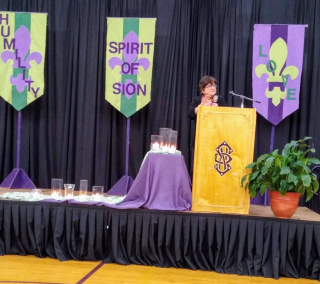 She's a winsome, strong voice, especially when it comes to her resolute opposition to the death penalty. In fact, that's mostly what she talked to the students about that morning. I've written about -- and against -- capital punishment for decades, and slowly the U.S. and its states are moving in the right direction as more and more states abolish the death penalty.

But I want to pick up on something Sr. Helen said almost in passing. She was talking about how she wrote her first book, Dead Man Walking, and how it became enormously popular and got turned into a movie when she said this:

"Writing is a ministry to get the word out."

In my Protestant tradition of Reformed theology we often speak about our "calling," by which we mean the occupation or direction in life to which we somehow feel God has guided us. It's where the word vocation comes from -- through the Latin word vocare, meaning to call.

For me, my calling, or vocation, has been writing. I sometimes tell people that I would be a writer even if my career were putting fenders on Fords. I sort of can't help writing.

Has it been a ministry? Well, yes and no.

Which is to say that, no, most of my writing is not designed to convince people that they, like me, should be Presbyterian Christians or, for that matter, Christians of any kind or adherents of any other faith tradition.

But yes in the sense that much of my writing is designed to get people to think about important and eternal things. Although I wrote a humor column for 27 years for The Kansas City Star, even in that -- as well as my more serious essays -- I have sought to give readers some real sustenance and not just what the late New York Times columnist Russell Baker called journalistic popcorn.

As I explained in my first book, A Gift of Meaning, my job as a columnist has been to view and experience the world around me and then to draw meaning out of what I've seen and offer it back to my readers. In some ways, I suppose, you could consider that a ministry.

Now, it's also true that in one or more of my books, I have written from a clearly Christian perspective and made clearly Christian arguments. My latest book is the best example of that -- The Value of Doubt: Why Unanswered Questions, Not Unquestioned Answers, Build Faith.

But for most of what I've written for The Star, The National Catholic Reporter, The Presbyterian Outlook and Flatland, my purpose is not didactic. Rather, my purpose is to complicate the thinking of readers and maybe teach them something they didn't know about -- often in the field of religion.

So if ministry means helping people see the pain and beauty of the world, the needs and desires of people, then, yes, the writing I do is a ministry. But if ministry means evangelizing people to believe in a particular set of religious doctrines, then, no.

So, in the end, Sister Helen is right, but not without some further explanation of what the word ministry might mean.

As the United Methodist Church continues to move toward schism over LGBTQ issues, a branch of the church this week declared itself "safe harbor" for LGBTQ clergy. The declaration said this, among other things: “We are haunted by the actions of the 2019 Special General Conference, which impose new and harmful definitions and restrictions on full participation of LGBTQ+ persons in the Church and abandon robust engagement of scripture to narrow biblical literalism. We do not believe The United Methodist Church has the authority or the power to impose limits on the movement of God’s Holy Spirit in the lives of God’s beloved LGBTQ+ children.” Good for those Methodists. They're speaking truth to power.