Home Archives Profile Subscribe
What will America's new religions look like?
Can writing really be a ministry?

The right way to talk about religion in public schools

In a public school, do teachers ever have the right to probe the religious beliefs of their students in front of other students in a classroom? 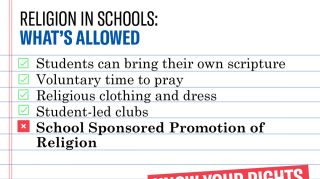 That's the question that has been raised in North Carolina, where a high school Spanish teacher has been put on paid leave after it was reported that she segregated "her students based on their religious beliefs, as well as their stances on abortion and gay marriage."

As the Associated Press story in The New York Post to which I've linked you says, "Julia Lopp, who teaches Spanish at South Johnston High School, first grouped the students based on their religious beliefs, and then questioned them about whether they supported or opposed abortion rights, WTVD reported.

"She then she asked them where they stood on LGBTQ rights and beliefs, according to The Johnston County Report.

"She’s accused of verbally ridiculing students who said they believed in God, according to the report."

The school superintendent called it "an unfortunate incident and one I wish had not happened.”

But some people have come to the teacher's defense, claiming the story was blown out of proportion.

Well, let's acknowledge that religion is a subject that is not constitutionally banned from public school classrooms and should not be. It's quite legal to teach about religion but unlawful to teach or promote any particular religion to students in such classrooms. In fact, students would be better prepared for life if they were religiously literate.

There are other, constitutional, ways for a teacher to engage students in discussions about religious matters and such subjects as beliefs about homosexuality. It sounds as if this teacher, however good her motives might have been, would do well to learn about some of those legal ways.

(The graphic here today came from this site.)

WHEN CATHOLIC POLITICIANS ARE DENIED COMMUNION

Back in 2004, when Sen. John Kerry was running for president, I recall writing a piece for The Kansas City Star about the question of whether he'd be denied Holy Communion because of some of his political views. Recently, former Vice President Joe Biden, also now running for president, was denied Communion for those reasons, but as this RNS article notes, "the once deeply controversial practice appears to be more theological curiosity than campaign killer." Indeed, the decision to deny a Catholic the Eucharist is one that should be resolved within the church and not one that should make much difference to non-Catholic voters.