A biblical archaeologist, Dr. Scott Stripling, has announced discovery, in Shiloh on the West Bank, of what could be a corner of the Ark of the Covenant. 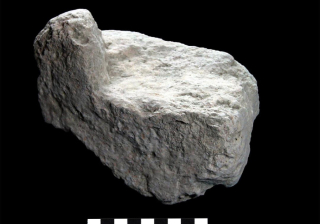 The Jerusalem Post story to which I have linked you reports this: "The find, said Stripling, director of excavations at ancient Shiloh and head of the Associates for Biblical Research, is consistent with what he expected to find in the fields of the ancient city where, according to the biblical account, the tabernacle for the Ark of the Covenant once stood."

Biblical archaeology is fascinating, if sometimes overrated. Which is to say that some people are so invested in the literal stories of the Bible that they want and expect biblical archaeologists to verify every story by digging into the land of Israel to find evidence. Any contrary evidence is rejected, while shaky evidence sometimes is accepted. And sometimes archaeological fans are criticized for trying to prove that the land has always belonged to the people of Israel and that Palestinians are interlopers. Almost everything in Israel has a political aspect to it, it seems.

Still, on the whole, biblical archaeologists have found a lot of things that confirm many of the stories found in what Christians and Jews consider scripture.

As for the Ark of the Covenant, in which the Bible says the tablets containing the Ten Commandments were placed, it's been missing since the Babylonians conquered Jerusalem in 587 B.C.E., which is a heck of a long time. There has been lots of speculation about where, if anywhere, it might be. Ethiopia has been one prominent guess. And every now and then you get some story about how it may have been found there.

The team that just made the announcement about the Ark of the Covenant seems to be quite reputable. As the Post story notes, Stripling "has been excavating the land of Israel for decades. He directed excavations at Khirbet el-Maqatir from 2013 to 2017, served as a field supervisor of the Tall el-Hammam Excavation Project from 2005 to 2010, and was a supervisor of the Jerusalem Temple Mount Salvage Project, as well.

"His Shiloh team is made up of archaeologists and volunteers from 11 universities around the world – an interdisciplinary team of scientists, historians and biblical scholars."

So this is interesting news. Better news would be the discovery that everyone in the world is doing the best job possible of living up to the demands of the Ten Commandments.

(The photo here today shows the piece found that could be part of the Ark. The picture came from the Jerusalem Post site and carried this caption and credit line: "The corner of the horned altar found at the Shiloh excavations in the West Bank [Credit: Courtesy Associates for Biblical Research])"

This past February, in a close vote, the United Methodist Church reaffirmed its stance forbidding ordination of LGBTQ people as pastors and forbidding current pastors from officiating at same-sex weddings. But that has hardly settled things. This past week the denomination's top court has been struggling with various issues related to that decision. Here's an update about all of that from Religion News Service. The denomination could have saved itself much of this trouble if it had just voted to do the right thing in the first place instead of voting to keep its repugnant bags.

If, like me, you love to read and if, like me, you're a fan of the late C. S. Lewis, I've got excellent news for you. The publisher HarperOne has just released a new book of Lewis' thoughts about reading. It's called The Reading Life: The Joy of Seeing New Worlds Through Others' Eyes. It's a lovely little treasure. "Those of us who have been true readers all our life," Lewis writes in one of the short essays in the book, "seldom fully realize the enormous extension of our being which we owe to authors. We realize it best when we talk with an unliterary friend. He may be full of goodness and good sense but he inhabits a tiny world. In it, we should be suffocated. The man who is contented to be only himself, and therefore less a self, is in prison. My own eyes are not enough for me." And this: "Those of us who are blamed when old for reading childish books were blamed when children for reading books too old for us. No reader worth his salt trots along in obedience to a time-table." And in a 1919 letter he wrote this: "If only one had time to read a little more: we either get shallow & broad or narrow and deep." Plus there's a lot more here from one of the great Christian apologists, whose death failed to receive the attention it deserved because it happened on the very day President John F. Kennedy was assassinated, Nov. 22, 1963.