Now that we're past Thanksgiving, I want to back up a few days and think about some strange ways recently that religion and politics have crossed paths in the U.S. 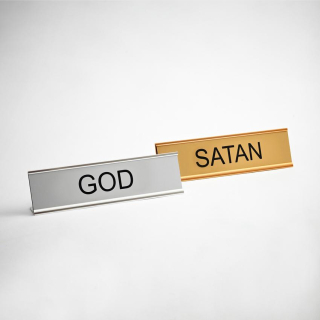 U.S. Energy Secretary Rick Perry said the other day that President Donald J. Trump (and Barack Obama before him) was "ordained by God" to be president.

I'm not sure just what that says about God's political instincts if God wanted both Trump and Obama, but I would say they could be charitably described as confused and/or conflicted.

What Perry actually said was this: "I'm a big believer that the God of our universe is still very active in the details of the day-to-day lives of government. You know, Barack Obama doesn't get to be the President of the United States without being ordained by God. Neither did Donald Trump."

And Perry's far from the only amateur theologian to thus opine. As the CNN story to which I've linked you above reports, "In February, former White House Press Secretary Sarah Sanders said that God 'wanted Donald Trump to become president and that's why he's there.' A month later, Secretary of State Mike Pompeo joined the chorus, saying it's possible God raised Donald Trump to be President in order to protect Israel from Iran."

Almost certainly this kind of thinking is drawn from the twelfth chapter of the New Testament book of Romans, authored by the Apostle Paul.

Here's how that chapter begins (in the New International Version): "Let everyone be subject to the governing authorities, for there is no authority except that which God has established. The authorities that exist have been established by God."

As scholar Mark D. Nanos has taught me, Paul's words are aimed at Jesus gentile followers who were part of temple or synagogue life in the First Century. Which means he was teaching them to respect temple authorities. He was not telling them that God put the Romans in a position to rule in the Holy Land and that people should acknowledge them as God's deputies.

To use Paul's words as warrant for suggesting that 2,000 years after Paul wrote, whoever the U.S. president is in office because God ordained him to be is a serious misreading of scripture. If Obama and then Trump really were both God's choice to be president, God's got some serious explaining to do.

Similarly, we've been hearing weird theology recently about whether people who criticize Trump are doing it under the influence of Satan.

As this Atlantic story notes, "Franklin Graham and Eric Metaxas, two prominent figures within the American evangelical movement. . .have now decided they must try to demonize his (Trump's) critics.

Paul Wehner, author of the piece, goes on to quote both Graham and Metaxas on what they believe to be demonic influence on Trump's critics.

Then Wehner concludes this of Graham and Metaxas: ".  . .they felt compelled to portray those with whom they disagree politically as under demonic influences, which for a Christian is about as serious an accusation as there is. It means their opponents are the embodiment of evil, the 'enemy,' anti-God, a kind of anti-Christ.

"There is no biblical or theological case to support the claim that critics of Donald Trump are under the spell of Satan. It is invented out of thin air, a shallow, wild and reckless charge meant to be a conversation stopper."

How about if we all agree to judge politicians by their actions and policies and not by scriptural misreadings or by the language of spiritual warfare? Maybe even God would ordain that more rational approach.

(I found the image here today at this site.)

NOT QUITE THE ORIGINAL

If you had a Thanksgiving meal yesterday, my guess is that it didn't match the very first Thanksgiving meal, as described in this RNS story. And if it did you heard such phrases yesterday as "Please pass the sobaheg stew." Somehow my family missed that yesterday, too.